Eyelid swelling is one of the common symptoms associated with various medical conditions. Swelling of eyelids is a characteristic symptom, in case of allergic reactions. While some people develop swelling of both the upper and lower eyelids, others experience the condition in any one of them. Sometimes, such swelling may be accompanied with other symptoms like pain, redness, fever and itching. Such additional symptoms may vary from one person to another, according to the underlying cause and its severity.
Eyelid swelling can be caused by various reasons, some of which are very common, while others are rare. While some develop the condition as a symptom of certain medical conditions, trauma to the eye is another common cause for swelling of the eyelids. Such trauma could be in the form of eye injury caused by foreign objects, facial burns or even eye surgeries. Mild cases may subside within a few hours, but persistent swelling with additional symptoms surely needs medical attention. Eyelid swelling is a condition which can be caused by a number of reasons, but the exact cause has to be diagnosed on the basis of additional symptoms, the medical history of the patient and the family history.
Common Causes of Eyelid Swelling
Allergies
Eyelid swelling is one of the characteristic symptoms of allergic reactions, which could be mild to severe (anaphylactic allergic reaction), in nature. Any one or both the eyelids may get swollen due to an allergic reaction to anything like drugs, nail polish, cosmetics, hair spray and soaps. It could be dust allergy, chemical allergy, plant allergy or even animal allergy (caused by pets). These allergies lead to eyelid swelling and itching, along with redness. In general, anything that causes an allergy may lead to swelling of the eyelids, which may or may not cause redness and itching. Pain is not usually associated with swelling caused by allergies. In case of severe allergic reactions like breathing trouble, seek immediate medical attention.
Blepharitis
Blepharitis is an eye condition that is characterized by swelling of the eyelids. The condition is caused by inflammation of the eyelash follicles that line the edges of the eyelids. Such inflammation can be caused by certain underlying conditions like rosacea (a skin disease that causes enlargement of blood vessels of the face), bacterial infections, scalp dandruff or dry eyes. Those with this condition may develop dandruff-like scales on the edges of the eyelids. Apart from eyelid swelling, blepharitis may cause symptoms like pain, itching, redness, crusting, burning sensation, loss of eyelashes and blurred vision. The affected person may also develop a gritty sensation while blinking.
Stye, Conjunctivitis
Styes are similar to pimples and develop near the base of the eyelashes. They are actually inflamed sebaceous glands and such inflammation is generally caused by staphylococcus bacteria. Styes can cause swelling of the eyelids, with or without itching, pain and redness. There are chances of spreading the infection, if you try to squeeze or pierce a stye. Unlike styes, conjunctivitis is an eye infection which can be caused by virus, bacteria, or any allergy. It is contagious and is characterized by eyelid swelling, redness, itching, burning, pain and eye discharge. Otherwise known as 'pink eye', the condition denotes inflammation of the conjunctiva, the protective lining of the sclera (white part of the eye) as well as the inner regions of the eyelids.
Chalazion, Cellulitis
Chalazion is a condition which causes a cyst-like formation in the eyelid, mostly in the lower eyelid. The condition is caused by blockage of the duct that drains small oil glands in the eye, called Meibomian glands. Apart from swelling, the condition may produce symptoms like pain, itching, redness, tenderness and sensitivity to light. Though, they usually subside on their own, it is always better to consult your ophthalmologist and get the condition diagnosed and treated. As far as eyelid swelling is concerned, cellulitis is also found to be a cause. Preseptal cellulitis (periorbital cellulitis) is one such condition that causes swelling of the eyelids as well as the skin around the eyes. This condition may sometimes worsen to orbital cellulitis, which is a serious and uncommon medical condition that needs immediate medical attention.
Other Eyelid Swelling Causes
Though, the most common eyelid swelling causes are not serious or life-threatening, there are certain underlying conditions that may lead to severe complications. If left untreated, some of these conditions may lead to loss of sight, loss of the eyes and even sepsis. The mode of treatment may vary with the underlying cause and the severity of the condition. It is said that cold compresses are beneficial in reducing such swelling. You must not use cosmetics and avoid rubbing or touching the eyes. Follow your doctor's instructions.
The eye being such a delicate part of our body, any eye problem should never be taken lightly. Whatever may be the cause, if you develop an eyelid swelling which does not subside within a few hours or a day, you have to consult a doctor immediately. You can approach a general practitioner, an ophthalmologist or even a skin specialist for this purpose. You must seek immediate medical attention, in case of symptoms that are severe and/or persistent.
Share This 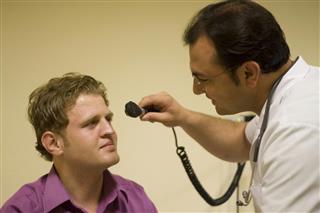 Swollen Eyelids in the Morning

Chipped Tooth - What to Do?