There are various indicants of a bacterial infection; however, they may vary according to the type of infection. Recognizing the symptoms on time would help you in adopting the necessary measures to treat the same. ...

There are various indicants of a bacterial infection; however, they may vary according to the type of infection. Recognizing the symptoms on time would help you in adopting the necessary measures to treat the same. … 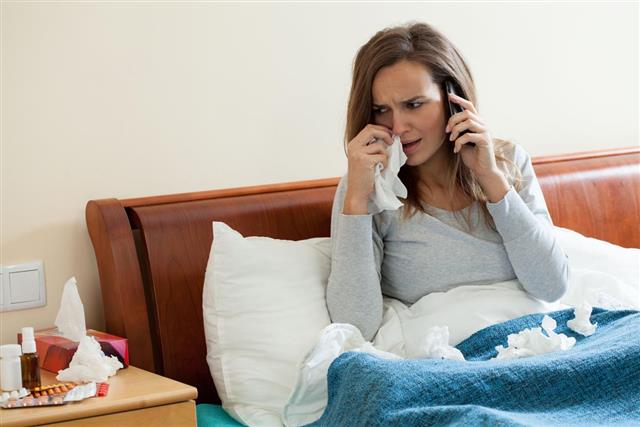 Bacterial infections are caused by certain bacteria that are harmful to the human body and detrimental to the overall health. There are numerous bacteria present in our surroundings. Amongst them, not all bacteria are harmful. The human body is inhabited by millions of bacteria — microscopic organisms, most of which are not pernicious in nature. In fact, many of them are important for a healthful functioning of the body. We look into what a bacterial infection is, and what symptoms come forth when the infection overtakes the system.

It is a fact that most of the bacteria that inhabit our body are benign. However, there are several types of bacteria that enter our body, chiefly through the respiratory system, and multiply, thereby causing instability of the existing innocuous bacteria of the body. A bacterial infection may cause various infectious diseases and medical conditions, like strep throat, urinary tract infection, and irritable bowel syndrome (IBS), to name a few. These bacteria are also called pathogens. Once these bacteria start colonizing, a healthy body begins to show the symptoms of a bacterial infection.

Bacterial infections have the potential to drive a healthy body to feel noticeably sick. When the human body is infected by bacteria, the immune system countermoves to defend, and thus protects the system as the body may succumb to fever, cold, cough, and chills. This is when the body cannot fight the infection on its own. Symptoms differ according to the type and location of the bacterial infection. As mentioned afore, flu-like symptoms, such as high body temperature and sore throat are prominent as well as common indicants. Most infections feature these as prodromal symptoms. You must not ignore these symptoms, and consult a healthcare professional without any delay. Besides, there are certain serious indicants as well that call for immediate medical assistance.

Sepsis
☛ When bacterial infection from the affected part of the body enters the bloodstream, the condition is regarded as sepsis. Recording high body temperature, enduring shaking chills and hypotension are the symptoms attributed to sepsis. If the condition does not find appropriate medical refuge, the patient may go into a state of coma, leading to fatal stages, like organ failure and consequently, death.

Conjunctivitis
☛ Also regarded as pinkeye, this condition includes symptoms, such as redness, swelling, and irritation in the eye. Besides, you may also experience crusting around the eye, especially after you wake up in the morning. Your eyes would feel chapped, moisture deficient, and lucifugal, too.

Abdominal Cramping
☛ Bacterial infections may invade the gastrointestinal tract if foods that are unfit/unwholesome are consumed. Bacteria, such as Escherichia coli (E. coli) and Staphylococcus Aureus are known to be the prime culprits for causing an increase in the number of food-poisoning cases. Abdominal discomfort, flatulence, recurrent episodes of regurgitation, and diarrheal tendencies may develop, rendering the individual as being susceptible to fatigue and weakness.

Meningitis
☛ This is a type of bacterial infection that hampers the nervous system. A throbbing pain in the temple, stiffness of the neck which restricts placid movements, nausea, syncope, and fatigue are hallmark symptoms of meningitis. However, a symptom that affects the body’s equilibrium is the sense of being delocalized, thereby also affecting the conspicuous alertness of the individual. The condition demands prompt medical aid to cease undue complications, such as coma, seizures, or paralysis.

Sinusitis
☛ A pupating bacterial infection may also lead to sinusitis, which often is considered one of the most irritating and discomfiting conditions to endure. Sinus drainage may be yellowish-green in color, and thick and greasy in consistency, causing severe headache, chest congestion, palpitations, fever, and body ache. In severe cases, the patient may experience a pressure buildup in the eye resulting in temporary visual distortion.

Skin Breakouts
☛ Acne and pustules may develop if your skin is infected bacterially. The skin experiences rashes; its nature being dispersed, or concentrated over specific regions of the body. The area may itch, causing redness and may give rise to sores that may discharge pus. Subsequently, the sore will form a scab which will crust as it heals.

Urinary Tract Infection
☛ Bacteria may also cause infection in the urinary tract leading to discomfort in the area. Urge to visit the lavatory every few minutes to urinate, noticing traces of blood with the urine being foamy in nature, and experiencing a stinging throb while passing urine define the symptoms of a urinary tract infection.

Bacterial Vaginosis
☛ If the vagina is affected with a bacterial infection, predominant symptoms may include emitting foul odor and itching in the private parts, which may aggravate the condition.

✹ Staphylococcus: Also known as staph, this bacterium is one of the most common, inhabiting the human body. The indicants include skin infection, boils, rashes, buildup of abscess, eczema, impetigo, furuncle, etc. Staph can also lead to inflammation of the breasts often called mastitis, where bacteria is released into the mother’s milk, thus creating complications for the baby.

✹ Methicillin-resistant Staphylococcus aureus: This is a type of staph, it being an antibiotic-resistant bacterium. Symptoms of bacterial infection include sepsis, necrotic pneumonia, and toxic shock syndrome.

✹ Streptococcus: This is one of the common bacteria that may result in several infections, like strep throat, respiratory infections, pneumonia, rheumatic fever, scarlet fever, etc.

✹ Helicobacter pylori: Alternatively known as Campylobacter pyloridis, this bacterium found in the stomach is the main culprit for peptic ulcers. It is also found in colonies in the gastrointestinal region. Bacterial infection symptoms include stomach pain, and inflammation of the stomach and cell walls.

✹ Salmonella: This pathogen can cause salmonella food poisoning. Salmonella infection, often is caused due to contaminated poultry products, like raw eggs.

Simple diagnostic tests will make sure if a person is suffering from a bacterial infection. A blood test, or urinalysis may be conducted to understand the type of infection and in order to prescribe appropriate treatment. If the need arises, your doctor may order for culture test of the tissue to further the line of treatment. Many bacterial infections that are mild get cured on their own, but in severe cases, the healthcare provider will suggest antibiotics to treat the condition.

Antibiotics, like penicillin, quinolone, aminoglycosides, and tetracyclines are suggested to treat various bacterial infections. Following proper hygiene and a healthy diet can keep you from contracting these infections, while acting immediately on alleviating the symptoms with appropriate treatment.

✍ Disclaimer: The article published herein, is meant to accomplish pedagogical purposes only. The recommendations mentioned hereby may not be generically applicable. The information, by no means, intends to supplant the diagnosis and advice imparted by the medical practitioner.