Bone marrow cancers are cancers that involve uncontrolled division of white blood cells or their precursor cells present in the bone marrow. The current article describes a few of the common cancers under this category, as well as the diagnostic methods and treatment options available.

Bone marrow cancers are cancers that involve uncontrolled division of white blood cells or their precursor cells present in the bone marrow. The current article describes a few of the common cancers under this category, as well as the diagnostic methods and treatment options available. 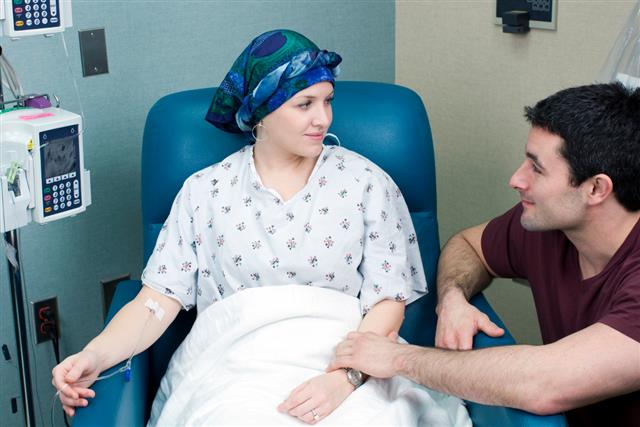 Bone marrow is a soft, spongy tissue present in the cavity of certain bones. It is the site for hematopoiesis — formation and development of blood cells. All blood cells arise from a multipotent stem cell called hematopoietic stem cell (HSC). This HSC gives rise to two types of cells termed as myeloid progenitor and lymphoid progenitor. These two progenitors further give rise to red blood cells (RBCs), and different types of white blood cells (WBCs).

The hematopoietic process is regulated through complex mechanisms involving chemical messengers of the immune system, and the expression of receptors for such messenger molecules. A failure in any of these mechanisms can lead to the uncontrolled division of immature blood cells, thus giving rise to cancer. Such a failure can occur due to variety of reasons including, spontaneous gene mutations due to chemicals and radiations, chromosomal aberrations, etc.

The term ‘bone marrow cancer’ encompasses the set of cancers that originate due to uncontrolled proliferation of the progenitor and mature cells present in bone marrow. It includes multiple myeloma that arises from plasma cells, leukemias that arise from immature white blood cells, and lymphomas which involve tumors developed from abnormal lymphocytes.

It implies a cancer of plasma cells, which are the antibody-producing B cells that arise and mature within the bone marrow. Normally, these cells secrete antibodies for a limited period and die. However, in case of multiple myeloma, the affected plasma cells keep on dividing without the requirement of any trigger. This leads to an excessive production of antibodies. The excess light chains of such antibodies that get excreted through urine are termed as Bence Jones proteins. The presence of such proteins in the urine is a diagnostic marker for this cancer. The symptoms include fever, anemia, brittle bones, weakened immune system, and abnormal bleeding.
Leukemia

Commonly known as blood cancer, leukemia refers to a set of cancers originating from the myeloid and lymphoid lineage of cells present in bone marrow. The cancerous cells arise in the bone marrow, and keep circulating throughout the body, rather than forming solid tumors. The symptoms include, weakness and fatigue, weakened immune system leading to frequent infections, night sweats, fever, etc. Leukemias have been classified into the following four types depending on the affected cell type, and the clinical progression of the diseases.

» Acute Leukemia
These cancers tend to arise from less mature cells, and progress aggressively. They can develop at any age. They include:

» Chronic Leukemia
These cancers develop slowly, and are less aggressive. They tend to arise from relatively mature cells, and mostly affect adults. They include:

Lymphomas include a set of cancers characterized by solid tumors that arise from lymphocytes. They are broadly divided into two categories: Hodgkin’s and non-Hodgkin’s lymphoma. The common symptoms include swollen lymph nodes, fever, enlargement of liver and spleen, weakness, weight loss and chest pain. The involvement of bone marrow in lymphomas occurs when lymphomas originate elsewhere in the body, and then disseminate to the bone marrow. Lymph nodes are the common sites of origin. Only a handful of cases with aggressive non-Hodgkin’s lymphomas have been identified wherein the tumors originated in the microenvironment of the bone marrow. These lymphomas have been collectively termed as primary bone marrow lymphomas, and are extremely rare and very less studied.

A blood test involving complete blood count gives the first indication of any abnormalities. Detailed tissue and cytological investigations including bone marrow biopsies, and tests to detect chromosomal abnormalities are used to identify and/or confirm the type of cancer. Imaging techniques like Computed Tomography (CT) scans are also used. Urine test to detect the presence of Bence Jones proteins is essential for the identification of multiple myeloma. Latest methods for diagnosis employ DNA-based methods to identify the exact subtypes of the disease, and decide the appropriate treatment.

The treatment options for bone marrow cancers include chemotherapy, radiation therapy, immunotherapy, stem cell therapy, surgery and bone marrow transplants. Chemotherapy involves chemical agents that are prescribed as an oral medicine or are administered intravenously. Radiation therapy implies the bombardment of affected tissue with high-energy gamma rays and X-rays. Immunotherapy is a method wherein the immune system of the body is triggered to act against the cancerous cells. Stem cell transplants like hematopoietic stem cell transplant or peripheral blood stem cell transplant may also be used. These treatments help to restore the stem cells that are destroyed during chemotherapy or radiotherapy. However, transplantation techniques are not devoid of the risk of complications. One or a combination of treatments are used depending on the type and subtype of cancer, the stage at which it gets diagnosed, as well as the risks and physiology of the patient.

Bone marrow cancers include abnormalities in the proliferation of a distinct set of cells present in the bone marrow. An early diagnosis followed by immediate commencement of the appropriate treatment is crucial to control the progression of these cancers.