Bulbar ALS symptoms usually affect the tongue and may indicate the onset of ALS. The following article will cover some information related to bulbar ALS problems and help you understand the initial symptoms of this life-threatening condition... 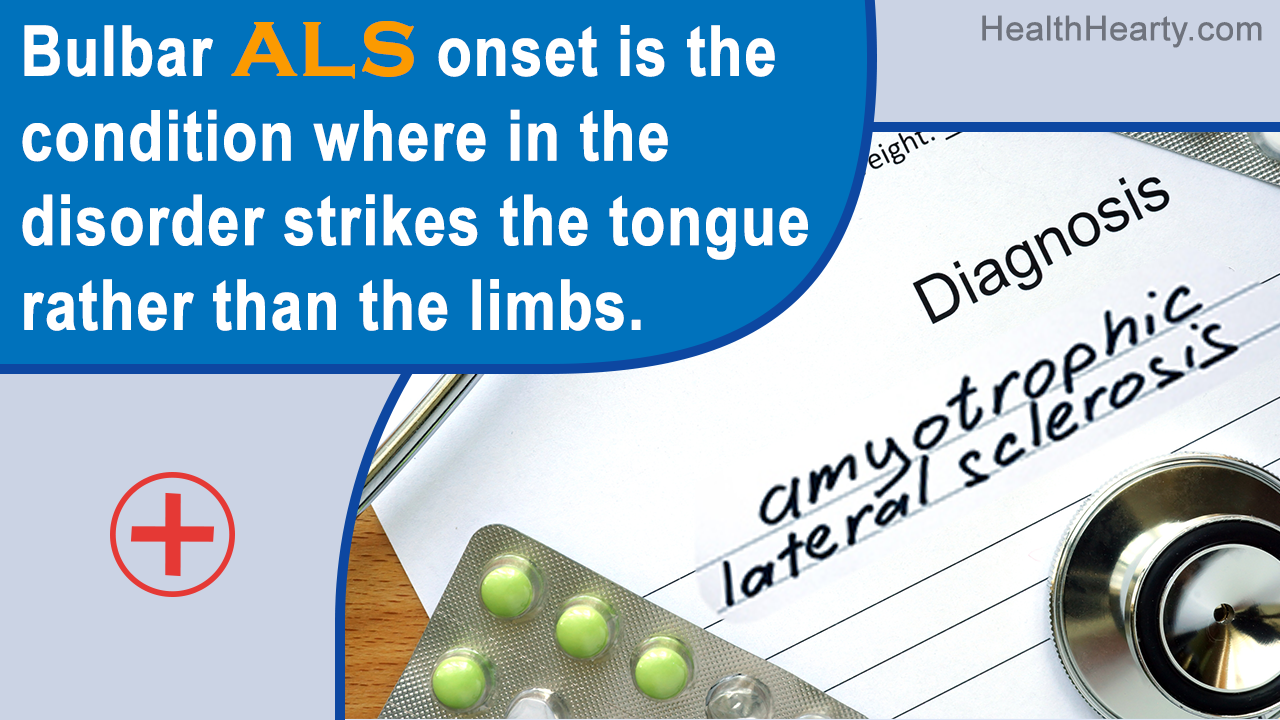 Bulbar ALS symptoms usually affect the tongue and may indicate the onset of ALS. The following article will cover some information related to bulbar ALS problems and help you understand the initial symptoms of this life-threatening condition…

Amyotrophic lateral sclerosis (ALS) is a neuromuscular condition that is mostly a fatal disorder. ALS is also commonly known as the Lou Gehrig’s disease in United States. ALS is characterized by muscle weakness, muscle wasting, fasciculations, total paralysis of voluntary muscles, etc. The motor neurons in the body die which leads to loss of muscle control by the brain. This is because the muscles can no longer receive messages and impulses from the brain with the motor neurons dead. These muscles eventually weaken and undergo atrophy leading to the death of muscle cells. This leads to many problems in walking, breathing, talking, bending, pinching, etc. There is no known cure for amyotrophic lateral sclerosis. When people lose the function bulbar muscles, it is referred to as bulbar onset of ALS.

What is Bulbar ALS Onset?

Bulbar ALS onset is the condition wherein the disorder strikes the tongue rather than the limbs. The pons and medulla of the brainstem was known as bulb or bulbar area of the brain. The nerves in the facial region that are connected to the bulb region of the brain controls the throat, tongue, jaw and face. ALS diseases causes the death of the nerves in face or bulbar region and decreases in functioning of the motor neurons, resulting in spastic bulbar palsy.

This spastic bulbar palsy may develop into bulbar ALS as the disease progresses. The muscles of the throat, tongue, jaw and face are affected. This is because the motor neuron cells in the spinal cord degenerate leading to their death due to ALS. The bulbar ALS or ‘bulbar onset’ is seen in about 25% of patients who are to develop ALS. Bulbar ALS symptoms are seen in 75 to 80% of the patients with classic ALS symptoms.

What are Bulbar ALS Problems?

The ALS symptoms and diagnosis is made on the physical signs shown by the patient. The first symptoms include slurring of speech. This is because the tongue is the first to get affected. The speech becomes garbled and words do not come out right. The patient may start speaking through the nose, have problems in pronunciation and have problems when trying to speak long sentences. The voice at times may not be projected well and becomes hoarse. With time, the person loses the ability to speak.

As the condition progresses, the patient has difficulty in swallowing and chewing food. Initially, swallowing hard food may become difficult. Soon, the patient will have problems swallowing purred food as well. Some patients may even have problems in closing their mouth or eyelids. The patient may begin to drool and the tongue may exhibit tremors or fasciculations. The disorder tend to progress faster than the limb onset.

In some cases, the person may choke on food, once it enters the trachea or windpipe. The patients are prone to bulbar ALS infections like pneumonia. This is because the respiratory infections weaken the diaphragm and chest muscles. Thus, the lungs cannot clear themselves of aspirations. Most patients find it difficult to breathe, especially at nights. This leads to nocturnal symptoms of bulbar ALS and headache, nocturnal dyspnea, orthopnea, nightmares and sleepiness during day. These are some of the many bulbar ALS problems that a patient may be affected with. It has been found that the average age for the onset of bulbar ALS is 55 to 60 years. The ALS prognosis shows 50% of the patients survive after 3 years and 20% after 5 years. The ALS survival rate for patients after 10 years is just 10%.

If one finds it difficult to chew, swallow or have control over drooling, it may indicate early symptoms of ALS. The bulbar ALS symptoms are very difficult to spot as they are very subtle in onset. If one experiences spasticity and weakness while talking or chewing food and have an odd feeling in the tongue or mouth region, it is better to get it diagnosed. Ask your doctor in detail about what is ALS disease and its treatment. This was all about the various bulbar ALS problems. Hope you have been able to understand the subtle signs and symptoms of ALS onset.

The information in this article is intended as a supplement to, not as a substitute for, the expert and professional medical prevention, diagnosis, or treatment of a health care professional. The reader is advised to consult with a medical consultant before taking any home remedies, supplements or following any treatment advised. A medical consultant will be able to provide the reader with advice that is safe and effective for an individual’s specific needs and diagnose a particular health problem based on their personal medical history.