The diverticulitis surgery recovery time depends upon the procedure, type of the surgery, and the overall health of the patient. In most cases, people recover within 1½ - 2 months of the procedure.

The diverticulitis surgery recovery time depends upon the procedure, type of the surgery, and the overall health of the patient. In most cases, people recover within 1½ – 2 months of the procedure.

Diverticulitis is a medical condition, characterized by mild to severe abdominal pain and tenderness in the lower left abdomen. It is caused due to infection or inflammation of the bulging pouches (diverticula), present in the colon or the large intestine. If diagnosed in the early stages, it can be treated with medications, by following a proper diverticulitis diet, and making lifestyle changes.

However, surgery becomes a necessity for patients with chronic ailments and those who are non-responsive to medications and diet. The diverticulitis surgery recovery time varies with respect to surgery type and patient’s health condition. The type of surgery appropriate for a diverticulitis patient, is decided according to the number of attacks, general health, and the presence of underlying diseases (if any). 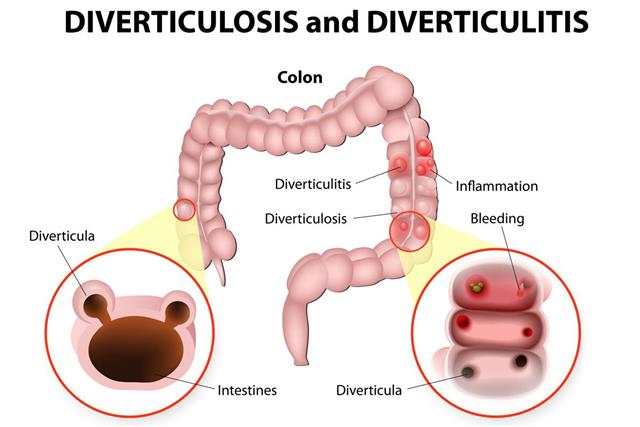 During a conventional diverticulitis surgery, the affected part of the sigmoid colon is removed after making an incision in the abdomen. This procedure is known as partial colectomy, which may be done in one step, or it may require a two-stage operation. A two-stage operation is usually required in case of emergencies. In a two-stage operation, first the diseased part of the colon is removed, after which the upper section of the colon is attached to an opening on the abdominal wall. This procedure is known as colostomy. Stools are eliminated from the body through this opening into a disposable bag.

The next stage of the operation involves reconnecting the two ends of colon. In recent times, a less invasive laparoscopy method is followed, for removing the diseased part of the colon and reconnecting the healthy parts. In laparoscopic surgery, a few small incisions are made to access the colon with endoscopic instruments. On an average, 6 percent patients diagnosed with diverticulitis require surgical treatment. As the episodes of diverticulitis attacks become more frequent when one grows older, diverticulitis surgery is more common in people above 40 years.

Recovery from diverticulitis surgery depends on several factors, including the type of surgery and overall health of the patient. In general, surgery complications are higher and the recovery time is longer in case of conventional method, as compared to the laparoscopic colectomy.

Immediately after the surgery, feeding is done via intravenous application. During this time, a nasogastric tube may be inserted through the nose into the stomach, in order to keep the stomach empty for a few days. Intravenous administration of fluid is gradually replaced with a liquid diet. This is usually done when the patient starts to pass gas, which is considered a sign that the colon is working again. If the patient tolerates the liquid diet and does not experience nausea or increased abdominal pain, then the liquid diet is replaced with a soft diet within a day or two.

The post-operative diverticulitis diet plan is based on low-residue food items, or foods containing low amounts of fibers. Such a diet may need to be continued for about 2 to 8 weeks after the surgery, or as instructed by the physician. A low-residue diet is usually recommended, as it is easier to digest low-fiber foods. Such a diet also give the intestine adequate time to heal. During the recovery period, it is very important to avoid lifting heavy objects and doing strenuous exercise. In general, it can take about 3 to 4 weeks to return to work or resume the normal activities, after an open diverticulitis surgery. But, in case of laparoscopic surgery, you can expect to resume your normal activities within 1 to 2 weeks.

Infection: Almost every surgery carries some risks of infection. In the recovery period, patients are expected to follow proper post-operative care, as suggested by the surgeon. This will help in quick healing of the incision sites and reducing surgery associated complications. The incision is usually dressed with a sterile bandage. Some redness around the incision site is normal, but increased redness and thick green or yellow discharge from the incision site, can indicate an infection.

Fever: After the surgery, a low-grade fever may be present. But, if the temperature exceeds 101.5 degree Fahrenheit, and fever is accompanied by chills, nausea, and vomiting, then be sure to seek immediate medical attention.

Constipation: Constipation is another common problem, that can be encountered after diverticulitis surgery. It is often caused by some of the pain medications, taken during this period. You can talk to your doctor about taking stool softeners, milk of magnesia or other medications to get rid of constipation.

Nausea and Diarrhea: Nausea is quite common after diverticulitis surgery. A soft and bland diet can help to manage this discomfort. Nausea is sometimes caused by some pain medications, especially if they are taken in an empty stomach. So, be sure to eat properly before taking your pain medications. Diarrhea, on the other hand, is caused by the shortening of the colon after the surgery, which allows the stool to move faster. The colon usually needs a few weeks to work normally after the surgery.