HIV or human immunodeficiency virus is known to cause acquired immunodeficiency syndrome, by damaging the white blood cells that play a crucial role in the body's defense mechanism. HIV infections in men has been observed to produce some non-specific symptoms in the early stage, such as fever, sore throat, headaches, skin rash, and swollen lymph nodes. 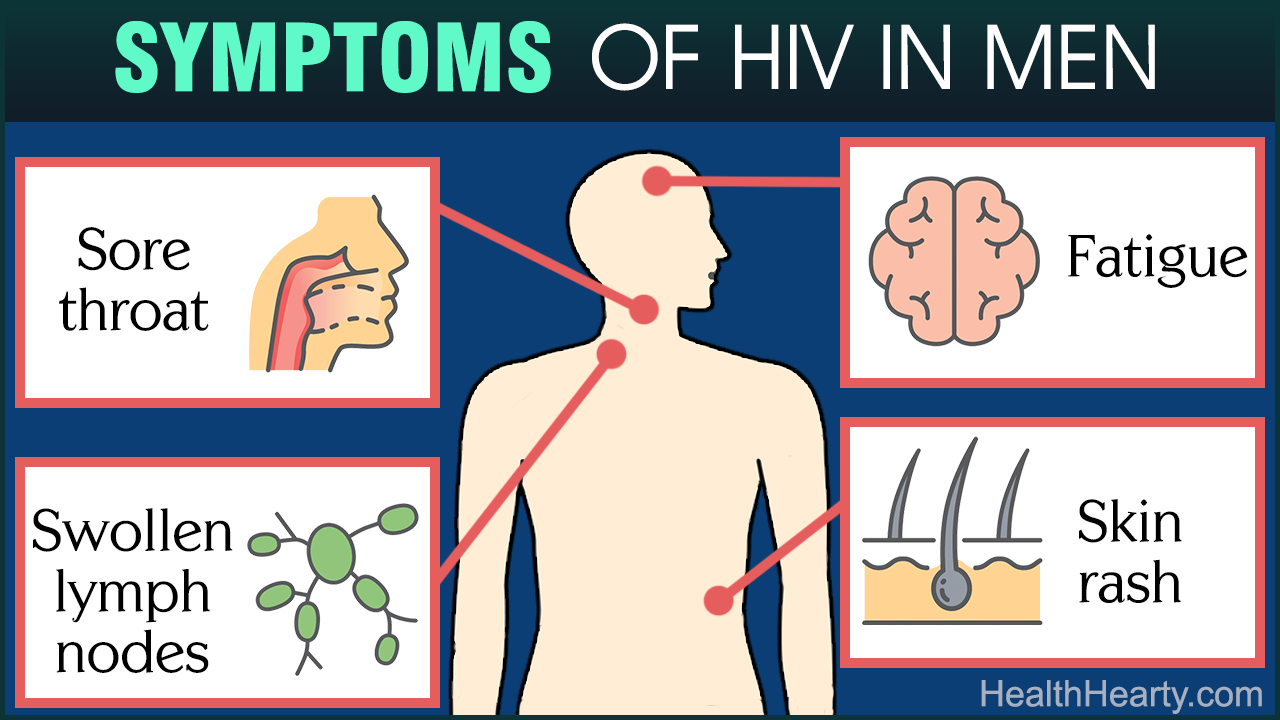 HIV or human immunodeficiency virus is known to cause acquired immunodeficiency syndrome, by damaging the white blood cells that play a crucial role in the body’s defense mechanism. HIV infections in men has been observed to produce some non-specific symptoms in the early stage, such as fever, sore throat, headaches, skin rash, and swollen lymph nodes.

HIV or human immunodeficiency virus is a lentivirus, which is a member of the retrovirus family. This virus is known to cause acquired immunodeficiency syndrome (AIDS), which is a condition, where the immune system gets weakened to such an extent, that the risk for getting some serious opportunistic infections and several types of cancer increases.

The human immunodeficiency virus attacks and destroys certain key white blood cells, concerned with fighting cancer and the infectious agents that enter the body. When these cells are destroyed, the immune system fails to prevent diseases and infections. However, it may take several years for the initial HIV infection to become AIDS and produce the debilitating health problems.

The early symptoms of an HIV infection in men resemble the symptoms of flu or mononucleosis. These symptoms typically appear within 2 to 4 weeks after the initial infection, but sometimes, the initial infection may not produce any symptom at all. It has been observed that, about 40% to 90% people infected with HIV experience the early flu-like symptoms within a month or two. The initial stage of HIV infection is known as primary HIV, or acute retroviral syndrome (ARS), which can produce the following symptoms.

Mild to moderate fever is usually one of the most common early symptoms of an HIV infection. Both men and women can experience this symptom, within 2 to 4 weeks following the initial infection. Fever can raise the body temperature to 100 or 101 degree Fahrenheit and it can be accompanied by chills, headache, and sweating.

The skin rash caused by an HIV infection may persist for a week or so. Usually, the rash appears as a red or discolored patch of skin with raised bumps. In individuals with dark skin, the rash can appear dark brown or black in color. The affected area can become very dry and itchy. HIV infected men can develop skin rashes in any part of the body, including the arms, hands, chest, stomach, feet, groin, and the penis.

HIV infected men can also develop open sores or ulcers in the early stage of the infection, especially in the mouth and throat. The ulcers can be quite painful and sometimes, they can appear in the anus and penis as well.

The lymph nodes produce and store immune cells and lymphocytes, and hence, they are an important component of the immune system. Enlargement of lymph glands occurs when the body is fighting an infection, which can be localized or systemic. The lymph nodes that are more likely to get swollen due to an HIV infection, are those located in the neck, groin, and armpit. Lymph nodes located in these areas can remain swollen for several weeks.

HIV infections can dramatically lower the energy level or stamina and thereby, compel the affected individual to take several naps throughout the day. The HIV infected individuals may experience unusual fatigue, even while doing simple day-to-day activities.

Men can develop a sore throat or throat inflammation in the early stage of an HIV infection, which can sometimes cause difficulty in swallowing.

The digestive or gastrointestinal symptoms associated with an HIV infection are, loss of appetite, diarrhea, and nausea and vomiting. However, not all men experience these symptoms during the early stage.

Excessive sweating during night, not related to the temperature of the room can be an early sign of HIV infections. Many individuals on the other hand, experience this symptom in the later stage of the infection.

Late Symptoms of HIV Infection
The primary HIV infection or acute retroviral syndrome (ARS), is typically followed by a stage, known as clinical latency or asymptomatic HIV. As the name suggests, the virus remains latent during this period, for which this period is usually asymptomatic. However, some people can get persistently swollen lymph nodes during this period. The clinical latency stage can last for about 3 years to more than 20 years. But, more commonly, this stage lasts for about 10 years. Eventually, this stage is followed by the early symptomatic HIV infection, where the virus starts to multiply and attack the immune system. In this stage, the following symptoms can be observed.

The early symptomatic HIV infection finally progresses to AIDS (acquired immunodeficiency syndrome). On an average, an HIV infected individual develops AIDS within 10 years following the initial infection, if he or she does not receive any treatment. Some of the debilitating signs and symptoms of AIDS include.

Many of the aforementioned symptoms are associated with opportunistic infections, which develop due to a severely impaired and damaged immune system.

How Does HIV Spread?
Human Immunodeficiency virus generally spreads through blood, semen, vaginal fluid and breast milk. The virus can get transmitted by the following three main routes.

➾ Sharing a common needle or syringe contaminated with HIV infected blood, during intravenous drug use, can also transmit the virus.

➾ HIV infected mothers can transmit the virus to their babies during pregnancy, delivery, and also while breastfeeding.

Sometimes, the human immunodeficiency virus can also spread through blood transfusions. However, this type of transmission is rare in recent times, as the hospitals and blood banks of many countries screen blood for HIV antibodies, before carrying out the transfusion process.

How Does HIV become AIDS?
After entering the body, the human immunodeficiency virus attacks a particular type of white blood cells, known as CD4+ T cells (T helper cells). This type of T helper cells contain the protein CD4 on their surface and they are responsible for initiating the immune response to diseases and infections. HIV, which is a type of retrovirus needs a host to replicate itself and so, it attaches itself to the CD4+ T cells and infects them. This eventually damages these T helper cells and thereby, weakens the immune system.

When a large number of CD4+ T cells get damaged and the count of CD4+ T cells becomes less than 200 per µL, an HIV infection is considered to have progressed to AIDS. Another criterion used to define the progression of an HIV infection to AIDS, is the development of certain diseases or complications, such as pneumocystis pneumonia, tuberculosis, toxoplasmosis, cytomegalovirus infection, and cryptosporidiosis, in HIV infected individuals.

Diagnosis and Treatment
Earlier, ELISA or ‘enzyme-linked immunosorbent assay’ test was the main diagnostic test for HIV/AIDS. In this test, a sample of blood is tested to look for the antibodies to the human immunodeficiency virus. If the result of this test comes out to be positive, then the test is repeated. A positive result for the second time is followed by another test, called western blot test, that looks for the presence of HIV proteins.

The immune system needs time to produce antibodies and hence, tests that look for antibodies to the virus may not be able to give accurate results immediately after the infection. Presently, a new test has been developed for the early detection of HIV infections, which basically examines a sample of blood for HIV antigen. HIV antigen is the protein, that the virus produces immediately after an infection. So, this test can give a conclusive result within a few days of exposure to the virus.

HIV/AIDS has no cure, but, proper treatment can increase the life expectancy of the people suffering from this disease. Treatment for HIV/AIDS basically aims at suppressing the debilitating symptoms, and improving the quality of life of the patients. Earlier, physicians had only a few options to treat a condition like HIV, and other opportunistic infections that can develop due to a weakened immune system. However, a number of drugs and medications have been developed in recent times, to treat this condition and the associated complications.

HIV/AIDS paves the way for some opportunistic infections, such as tuberculosis, candidiasis, salmonellosis, toxoplasmosis, cytomegalovirus infection, cryptococcal meningitis, and cryptosporidiosis. The risk for developing neurological disorders, kidney disease, wasting syndrome, and certain types of cancer, like Kaposi’s sarcoma, cervical cancer, Burkitt’s lymphoma, and primary central nervous system lymphoma, also increases with HIV infections. Early detection can however, prove helpful in slowing down the progression of the disease and reducing the severity of the symptoms. But, the early symptoms of an HIV infection can resemble the symptoms of flu and mononucleosis, and thereby, create confusion. So, it is better to get tested for the presence of human immunodeficiency virus, if a person feels that he or she is at risk of getting infected with this virus.