Muscular sclerosis is a disease that affects the brain and the spinal cord and causes severe physical and mental complications. Know more about muscular sclerosis and the early symptoms of this disease with this article.

Muscular sclerosis is a disease that affects the brain and the spinal cord and causes severe physical and mental complications. Know more about muscular sclerosis and the early symptoms of this disease with this article. 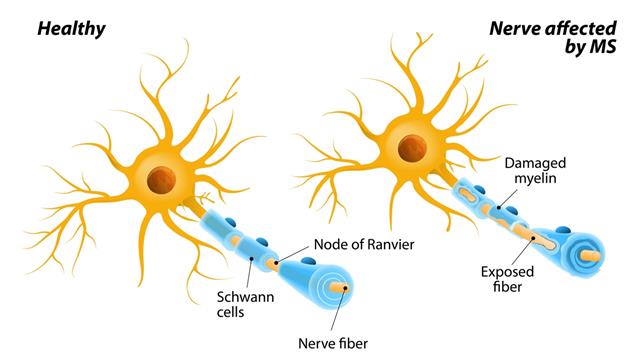 Muscular sclerosis or multiple sclerosis is regarded as an autoimmune disease, where the central nervous system (CNS), i.e. the brain, spinal cord and nerves are attacked by the body’s own immune system. This autoimmune disease mainly attacks and breaks down the myelin sheath, which is a fatty protein covering that surrounds the nerve fibers. Breakdown of this protective covering results in disruption of normal functions of the nerves, which becomes evident in the loss of muscle control as well as balance and coordination. Muscular sclerosis is a severe disease, which can gradually lead to physical and mental disability. Though many researches and studies have been conducted to find out exactly what causes muscular sclerosis and its cure, no major breakthrough has been achieved in this regard. Here is a brief discussion about the possible causes as well as the early symptoms of muscular sclerosis.

As has been mentioned already, no specific cause of muscular sclerosis has been discovered so far, though it is mainly considered an autoimmune disease. Researchers have been able to find out some immune factor and the immune cells responsible for attacking the nervous system, but the reason behind such autoimmune response is not known. Deficiency of vitamin D is another suspected cause of muscular sclerosis. This vitamin is synthesized by our skin on exposure to sun, especially the ultraviolet radiation of sunlight. A higher prevalence of muscular sclerosis has been observed in those parts of the world, which are situated far from the equatorial region and hence receive a low amount of sunlight. This is the reason that the deficiency of vitamin D is considered a possible cause of this disease.

Even a genetic link has not been ruled out, as it is often observed that people having a direct relative with muscular sclerosis are more likely to suffer from this disease. However, this disease is not considered a hereditary disease, rather it has been pointed out that some individuals may be born with a genetic predisposition, which makes them vulnerable to muscular sclerosis. Exposure to virus and bacteria can also cause inflammation of the myelin sheath and hence studies are in progress to find out the particular types of virus and bacteria that may have an association with the disease. Other risk factors include smoking, stress and exposure to some toxic substances.

The symptoms of muscular sclerosis can occur in acute and brief periods of attacks followed by recovery periods in some people, while in others, symptoms can continuously worsen and deteriorate the condition. Such slow progression results in gradual impairment of neurological functions. As the disease attacks the central nervous system, it directly affects the motor, sensory and visual functions of the body.

No permanent cure for this disease has been discovered so far. However, there are medications that can improve the quality of life of the patients with temporary relief. Physicians usually prescribe several drugs for alleviating nerve pain and muscle spasms. Antidepressants and corticosteroids are also used in the treatment of muscular sclerosis. Those individuals who have one or more risk factors for this disease, need to be extra vigilant for the symptoms to ensure prompt diagnosis and treatment.