An Overview of the Serum Protein Electrophoresis (SPEP) Test

You are here: Home / General Health / An Overview of the Serum Protein Electrophoresis (SPEP) Test

Arne Tiselius, a Swedish biochemist, was awarded the 1948 Nobel Prize in Chemistry for his research in the field of electrophoretic analysis. It was Tiselius who studied the separation of serum proteins on the basis of their migration in an electric field.

Serum proteins, which are also referred to as plasma proteins, are the proteins that are present in the blood plasma. Blood plasma, which accounts for more than 50% of the total volume of the blood in the body, is a pale watery fluid in which the blood cells are suspended. While more than 90% of the plasma is made up of water, the rest includes dissolved proteins, electrolytes, clotting factors, glucose, hormones, and carbon dioxide. The serum proteins include albumins, globulins, and fibrinogen. Albumin accounts for about 55% of plasma proteins, with globulins and fibrinogen accounting for 38% and 7%, respectively. The total protein test is a common test that is conducted for measuring the total amount of proteins in the blood. The serum protein electrophoresis test (SPEP) is another test wherein the serum proteins are divided into protein groups, on the basis of their shape, size, and electrical charge. The amino acids from which proteins are made carry electrical charges. The SPEP blood test is used for measuring the amount of each of these different proteins present in the blood.

How is the Test Conducted

First of all, the blood sample is collected in a serum separator tube. Serum is then placed on a specific electrophoresis support medium. Thereafter, it is exposed to an electric current. As a result, the proteins get separated into different groups. The blood serum might be placed in a gel or in a liquid in a capillary tube. With the application of voltage, the serum proteins separate into the following five different groups:

➠ Albumin (Maintains the osmotic pressure and transports hormones, drugs, and enzymes)
➠ Alpha-1 globulin (Good cholesterol or the high density lipoprotein)
➠ Alpha-2 globulin (Haptoglobin or the protein that binds with hemoglobin and enables it to carry oxygen)
➠ Beta globulin (Protein that facilitates the transport of nutrients through the bloodstream and helps fight infection)
➠ Gamma globulin (Antibodies that produce an immune response)

The principle behind electrophoresis is that when a charged particle is placed in an electrical field, it moves towards the anode or cathode, based on the net charge carried by the particle. Serum proteins carry a negative charge at pH 8.6 and move toward the positively charged electrode (anode). Serum is placed into a sample trough within the support medium (which could be gels made of cellulose acetate, paper, starch, agarose, polyacrylamide) in a slightly alkaline solution. When placed in an electric field, five distinct protein bands (albumin, α1, α2, β, and γ) can be seen upon staining. A densitometer (a device that measures the degree of darkness or optical density of a reflecting surface or a photographic/semitransparent material) is used to measure and record the light absorbed by the protein bands. The light absorbed is proportional to the relative protein concentration. The protein concentration of each band is then calculated in g/dL. 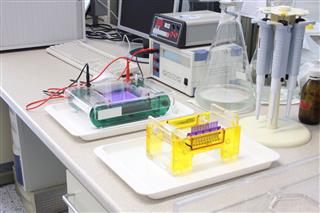 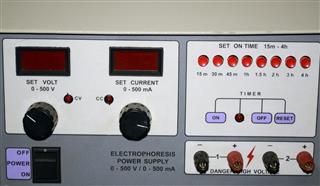 The purpose of the SPEP test is to measure the serum proteins and check for deviations from the normal SPEP test results. This test can be used for identifying the absence of certain serum proteins or the elevated/decreased levels of serum proteins.

What Does an Abnormal SPEP Test Mean?

The protein that moves closest to the positive electrode is the serum albumin. The albumin zone shows only albulin. This single, tall band is quite prominent. In case of decreased albumin levels, the band will appear different. Usually, low albumin levels might be indicative of conditions such as malnutrition, cirrhosis, and nephrotic syndrome, whereas high levels are observed in case of dehydration.

Between albumin and the alpha-1 band, is the area that is referred to as albumin-alpha-1 interzone. Staining in this zone implies that the alpha-1 lipoprotein (High-density lipoprotein or HDL) levels are higher. This might be observed in puberty or pregnancy or in individuals affected by conditions such as alcoholic liver disease. A sharp band may also be observed in individuals affected by liver cancer as a result of elevated alpha-fetoprotein (AFP).

The alpha-1 zone shows alpha-1 antitrypsin (an enzyme produced by the lungs), transcortin, and thyroid-binding globulin, whereas the alpha-2 zone shows ceruloplasmin (carrier for copper), alpha-2 macroglobulin, and haptoglobin. Higher alpha-1 and alpha-2 levels could be indicative of infection, malignancy, or any condition that is characterized by inflammation. A relative increase in alpha-2 fraction may be seen in nephrotic syndrome due to the relative larger size of the proteins and the inability to pass through the glomeruli. A decrease in alpha-1 component may be seen in alpha-1 antitrypsin deficiency and a decrease in alpha-2 component may be seen in hemolytic anemia due to decreased haptoglobin levels.

Gamma zone shows immunoglobulins (IgG, IgA, IgM, IgD, and IgE). Deficiency or elevated levels can be observed through abnormal staining. If a high gamma peak is seen, it might indicate inflammatory, autoimmune, and hematologic/non-hematologic conditions, whereas decreased levels might be indicative of agammaglobulinemia and hypogammaglobulinemia.

The serum protein electrophoresis test is often used to check for the presence of abnormal proteins called M proteins, which might be indicative of a form of cancer called myeloma (cancer that affects WBCs called plasma cells in the bone marrow) and other conditions such as Waldenström macroglobulinemia, monoclonal gammopathy of undetermined significance (MGUS), or primary amyloidosis.

It must be noted that deviations from the normal patterns indicate the presence of a medical condition. However, further testing is required for diagnosing the condition. Certain drugs can affect the results. Therefore, those who are undergoing this test must inform the doctor about any drugs that they might be taking.