Your Guide to Understanding the Genetic Factors of a Cleft Chin

Cleft chin, which is also referred to as dimple chin, is an inherited trait. HealthHearty provides information that will help you understand the genetic factors of a cleft chin.

You are here: Home / General Health / Your Guide to Understanding the Genetic Factors of a Cleft Chin

Cleft chin, which is also referred to as dimple chin, is an inherited trait. HealthHearty provides information that will help you understand the genetic factors of a cleft chin.

Cleft chin finds a mention in the Online Mendelian Inheritance in Man (OMIM), which is a compendium of human genes and genetic phenotypes. OMIM is a part of the National Institute of Health’s NCBI network of life sciences databases that enlists more than 10,000 human genetic variants.

Our physical appearance is determined by our genes, which are segments of deoxyribonucleic acid (DNA) involved in producing a polypeptide chain. The color of our eyes, texture and color of hair, hairline, shape of facial features, presence of dimples on the cheeks, dimple chin, freckles, shape of the body parts, etc., are all determined by our genes. The transmission of the genetic characteristics or traits from the parents to the offspring is referred to as heredity. Genotype, which means the genetic makeup of a cell or organism (information or instructions within the cell), is responsible for phenotype, which means the observable traits or expression of information within a gene.

While one chromosome in each pair comes from the mother, the other comes from the father. Thus, at the time of conception, both the mother and father contribute a copy of each gene. The combination of chromosomes determines the traits that the offspring would inherit. This is the reason why we look somewhat similar and different from our siblings.

All the cells contain the same DNA, and every time a cell divides, the original genetic material is copied. Genes are basically DNA segments that store the information needed for the cell to assemble proteins. These proteins are responsible for the specific physical traits. The term ‘locus’ refers to the location of a particular gene on the chromosome. Homologous chromosomes have the same gene at the same locus, although they may carry different forms of that gene. These variations are called alleles. A variation in protein activity or expression causes a different phenotype. Alleles have minor differences in their sequence of DNA bases, and are responsible for producing alternative forms of a particular trait. Alleles can be dominant or recessive. A dominant allele is a variation that produces the same phenotype, whether its paired allele is identical or different. On the other hand, a recessive allele shows or produces the phenotype only if its paired allele is identical.

If we use the letter C for the dominant allele for cleft chin, then the recessive allele (a chin without a dimple) will be represented by the letter c. So, those who have two identical alleles (CC or cc) are homozygous for this trait, while those with different alleles for that gene (Cc) are heterozygous. While the genotype comprises the paired alleles that one possesses for a particular trait, the observable trait itself is referred to as the phenotype.

The genetic makeup of the offspring or the probabilities of phenotype and genotype ratios can be determined using a Punnett square to some extent. It is a tool that evaluates the frequency of the occurrence of particular genotype and phenotype in the offspring. It can be used for predicting genotypes for one or more traits. If it is used for predicting genotype for one trait, such as a cleft chin, the square will have two rows and two columns. On the top of the square, the two alleles of one parent are written, whereas the two alleles of the other parent are written on the left side. 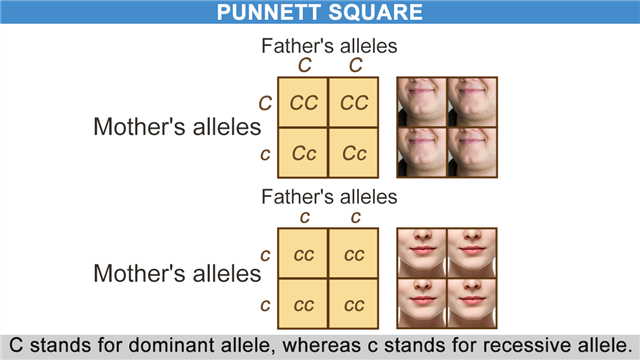 If both parents are heterozygous, (Cc x Cc) C and c would be written on the top and the left side of the square. The combination within the square in the first row would be CC and cc, and in the second row would be Cc and cc. So, according to the Punnett square, the genotypes of the offspring from this cross between two heterozygous parents are CC, Cc, and cc (1:2:1 ratio). Thus, if both parents have one dominant allele and other recessive allele (Cc x Cc), then the children have 75% chance of developing cleft chins. 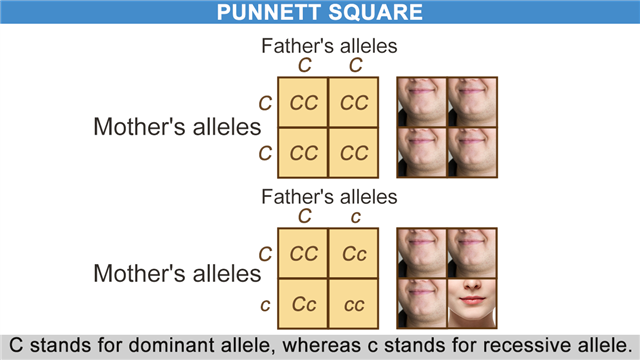 If one of the parent is heterozygous to the trait (Cc), while the other is homozygous (cc), then the Punnett square will have Cc, cc, Cc, and cc in the two rows. Thus, there is a 50% chance of the children developing cleft chins.

If the aforementioned theory is taken at face value, then one would wonder, why a child doesn’t have a cleft chin in spite of both parents having a cleft chin, or another child has a cleft chin even if his/her parents don’t. Well, one must understand that phenotypic expression can be affected by something called variable penetrance. Variable penetrance refers to the influence of environmental factors or modifier genes on the phenotypic expression of a dominant trait. For example, the cleft chin could occur, if the fusion of the lower jaw is affected by the fetal environment. Moreover, sometimes the presence of genes called modifier genes could suppress or alter the phenotypic expression of the dominant cleft chin gene. Under such circumstances, the bones could fuse, which in turn would cause a smooth chin, even if both the parents have a cleft chin. 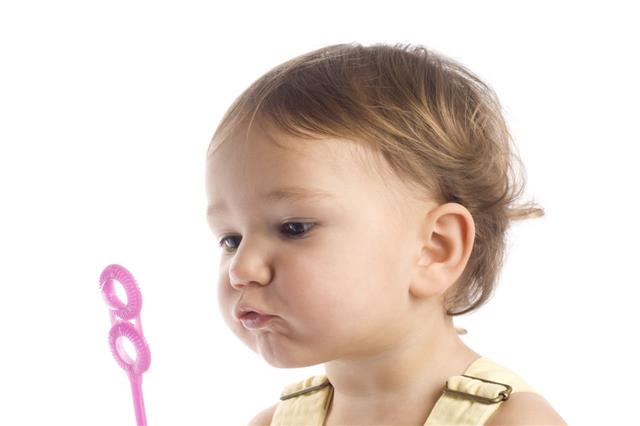