Hypotonia is a medical condition related to low/weakened muscle tone, which can be considered as a disorder and also a manifestation for other disorders. 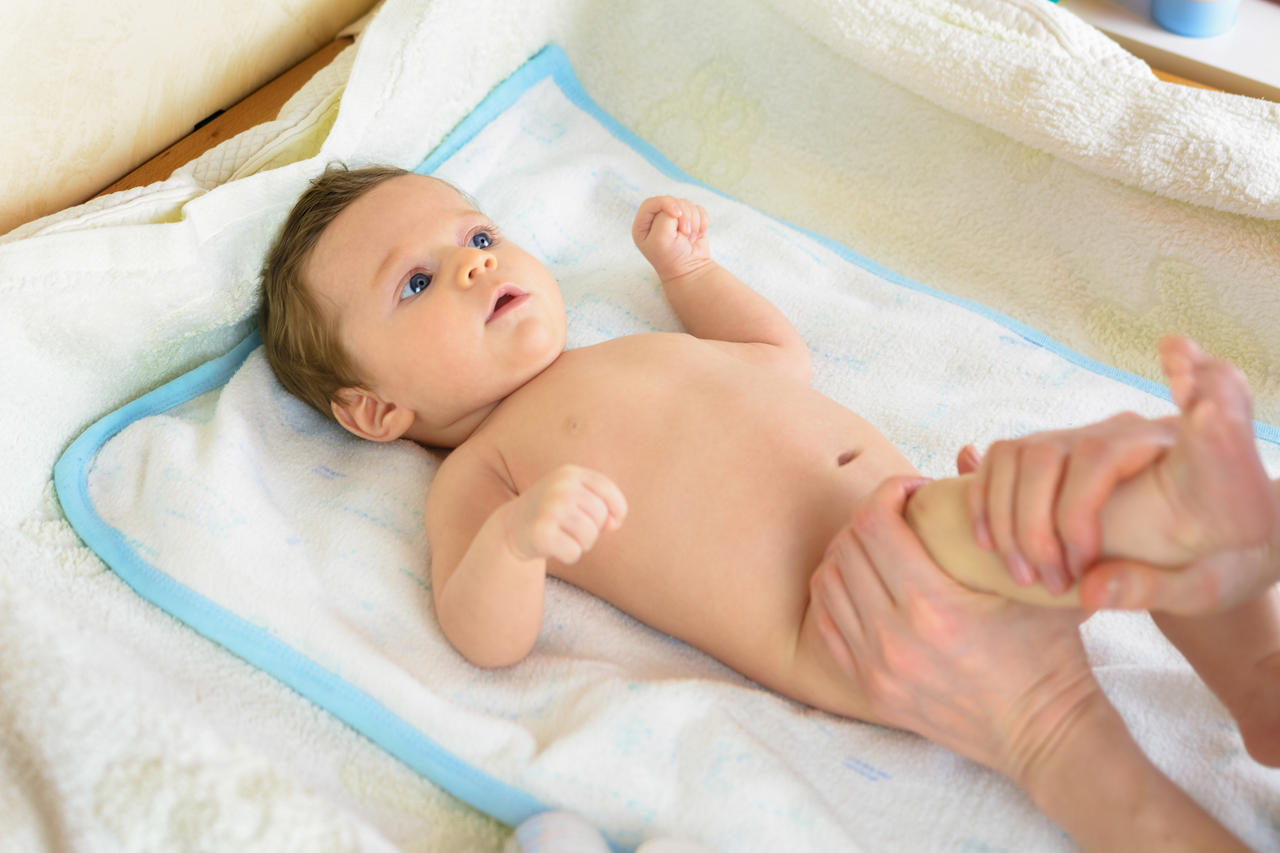 Hypotonia is a medical condition related to low/weakened muscle tone, which can be considered as a disorder and also a manifestation for other disorders.

Hypotonia primarily affects infants. A good way to check for the symptoms of this disorder is to hold the baby under the armpits and lift him/her up. A hypotonic child will have little resistance in its arms and will slip through easily.

Hypotonia is a medical condition characterized by low muscle tone and poor muscle strength. Although not a specific medical disorder, it can be considered to be a manifestation of different ailments affecting motor control and muscular development. Though the signs of hypotonia are easily identifiable, the underlying causes can be hard to pinpoint, making treatment a challenge. Hypotonia can be caused by conditions both congenital and acquired. Down syndrome, achondroplasia, Krabbe disease, and Leigh’s disease are instances of congenital hypotonia. Acquired hypotonia is commonly caused by muscular dystrophy.

Hypotonia has several well-defined symptoms, the most prominent among them being:

Reduced Muscle Definition: This is possibly the surest symptom of hypotonia. Weak underdeveloped muscles point towards a disorder – neurological or muscular – that has progressed into hypotonia.

Delayed Reaction to External Stimuli: Slow reflexes also send a warning signal in this direction. Mental retardation due to any disorder tends to make patients dull and unresponsive to surprise, pain, or other overwhelming emotions.

Floppy Baby Syndrome or Infantile Hypotonia: The disorder can be diagnosed in infancy when the baby shows signs of low muscle tone and is floppy like a rag doll. They are unable to keep their limbs flexed or extended for long periods of time. Breastfeeding can be a problem due to the child’s weak orbicularis (mouth muscle).

Drooling, speech impediments, and learning disabilities also signal the possibility of hypotonia. As children grow older, they begin to flex and stretch their limbs to perform more complex tasks which require a rapid increase in muscle tone. Children suffering from hypotonia are unable to keep up as their muscles, ligaments and joints do not develop sufficiently. They face challenges in learning to crawl, walk, lift their hands or balance their heads. Any activity that requires motor skills becomes tough and requires therapy to learn.

Hypotonia can be caused by any one or a combination of various disorders. However, they can be broadly classified as follows:

Genetic disorders that are the leading cause of hypotonia in infants.

Krabbe Disease: A rare, fatal disease, it affects the nervous system and leads to progressive degeneration of nerve control and bodily functions. Infants may appear normal at birth, but begin to show symptoms like fever, vomiting and seizures when they are between 3 to 6 months old.

Werdnig-Hoffman Disease: Also known as Spinal Muscular Atrophy, it manifests in infants at a very young age, usually in the first 6 months, and causes failure of major organs resulting in death within two to three weeks from the onset of the symptoms.

Down Syndrome: One of the most common disabilities in human beings, Down syndrome is characterized by retardation in physical and mental growth. Though, patients can live better lives with therapy and education.

Achondroplasia: An anomaly in the DNA causes dwarfism in patients of achondroplasia. It can be diagnosed prior to birth, but has no treatment as yet, and adults are of a short height, averaging just about 50 inches.

Canavan Disease: It is a degenerative disease that appears in infancy, and leads to mental retardation and loss of motor control. Death usually occurs before the age of 4.

Riley-Day Syndrome (also known as Familial dysautonomia): This is a disorder of the nervous system and affects the sensory receptors in the brain. Patients of Riley-Day syndrome are not able to produce tears even after bouts of intense crying, and suffer from poor growth and difficulty in grasping speech patterns and walking.

Griscelli Syndrome: This syndrome results in albinism and poor development of the immune system.

Leigh’s Disease: Also a disease of the central nervous system, Leigh’s disease is commonly found in infants of up to 3 years of age. It is caused due to a mutation in the mitochondrial DNA, and patients suffer from movement disorders, irritable behavior, nausea and seizures.

Marfan Syndrome: Patients suffering from Marfan syndrome are taller than average with long limbs and show unusual flexibility. However, they may suffer from heart anomalies, respiratory trouble, and near-sightedness.

Rett Syndrome: This is a neurological disorder almost exclusive to females, and results in retarded development of the hands and feet, and also results in small heads. Patients are unable to vocalize, and in half of all the cases, they can’t walk or move on their own.

Prader-Willi Syndrome: It was first described in 1956 by Andrea Prader and Heinrich Willi. Patients of PWS are generally short, with learning disabilities, and have a constant feeling of hunger which causes severe obesity in many cases. It is a prominent cause of hypotonia and low muscle mass.

Myotonic Dystrophy: There are two types of myotonic dystrophy; type 1 or Steinert’s disease, which is the severe form and is congenital, type 2 is a rarer form and does not manifest extreme symptoms. Type 1 patients suffer from learning disabilities and speech impairment, wasting of muscles, respiratory and heart trouble. Type 2 patients have milder symptoms like muscle pain and stiff joints. Also, the disease rarely shows up in youth. Although there is no cure for Myotonic Dystrophy, patients are advised to exercise according to a specified regimen to improve muscle strength.

Menkes Syndrome: This was discovered by John Hans Menke in 1962, and is characterized by poor mental development, frequent seizures, and hypotonia. It results from a genetic mutation, due to which the body is unable to maintain the required levels of copper. This affects the development of the skin, bones, hair growth, and also the blood vessels that service the brain.

As an acquired condition.

Muscular Dystrophy: A group of diseases that lead to muscle waste and atrophying, becoming progressively worse with time, causing weakness and eventually death. It is a common cause of hypotonia.

Metachromatic Leukodystrophy: It is a disease that affects the central and peripheral nervous system by inhibiting the formation of ‘Arylsulfatase A’, which protects the nerves of the brain. Over time, the lack of this chemical causes the nervous system to begin eroding. There are three forms of metachromatic leukodystrophy, affecting individuals in infancy, as juveniles, or in adulthood. The onset of the symptoms and death is quicker in infancy and increases with age. Difficulty in walking, reduced cognitive ability, and speech impairment are at the onset, and then progress to more serious ones like convulsions and eventual coma.

Infectious Diseases: Diseases such as encephalitis, sepsis, meningitis, and infant botulism can also cause hypotonia.

Guillain-Barré Syndrome: This syndrome is activated by an infection, and results in the progressive weakness of the limbs, and eventual partial or complete paralysis. It is a disorder of the nervous system discovered by Georges Guillain and Jean Alexandre Barré, in 1916.

Celiac Disease: It occurs due to the genetic makeup of the patient, and is characterized by weakness, prolonged nausea, and it may even affect other organs in the body. Treatment of Celiac disease is done by administering the patient a gluten-free diet, as it affects the small intestine. Adherence to such a diet gives the intestines time to recover.

Rickets: This is a disease that primarily affects children, and is caused by the deficiency of vitamin D in the body leading to weakening of bones and other skeletal disorders. An infusion of vitamin D or calcium is helpful in combating the illness. If left unchecked, rickets can cause hypotonia.

Dyspraxia and metabolic disorders such as hypervitaminosis (vitamin poisoning or vitamin overdose) are also a cause. There are other disorders that may be responsible for the onset of hypotonia, such as poliomyelitis, myasthenia gravis, congenital cerebellar ataxia, congenital hypothyroidism, hypotonic cerebral palsy, and teratogenesis (caused from utero exposure to Benzodiazepines).

An initial diagnosis of hypotonia can be made by physical examination of the patient and the presence of the more obvious signs of the disorder such as low muscle tone, poor reaction time, slurred speech, or in case of an infant, its difficulties in breastfeeding. Hypotonia is considered to be cerebral palsy when it affects the brain, and muscular dystrophy when it affects the muscles.

A more comprehensive diagnosis would involve several tests like:

There is no known and approved treatment available to cure hypotonia. However, depending on the diagnosis, a two-pronged strategy of medication and supportive therapy can be adopted. Children can be put under the care of a physiotherapist who charts out an exercise regimen to develop muscle strength and speech. Occupational therapists can be helpful in managing learning disorders. Acupuncture is used in some cases to help rejuvenate atrophied muscles. Electrical neuromuscular stimulation is sometimes advised for patients who also have weak muscles in addition to low muscle tone. Continuous therapy, care and exercise have helped patients lead more fuller lives despite the often debilitating conditions that cause hypotonia.

Disclaimer: This article is purely for informative and educational purposes, please seek the advice of a registered medical practitioner before attempting self-diagnosis or treatment of the condition.