Is Autism More Common in Boys? You’ll Be Surprised to Know

Autism is a complex multifactorial disorder characterized by altered neural development, and is more frequently observed in males. There is no single reason that can explain such a bias clearly, but several hypotheses and explanations have been put forth.

You are here: Home / General Health / Is Autism More Common in Boys? You’ll Be Surprised to Know 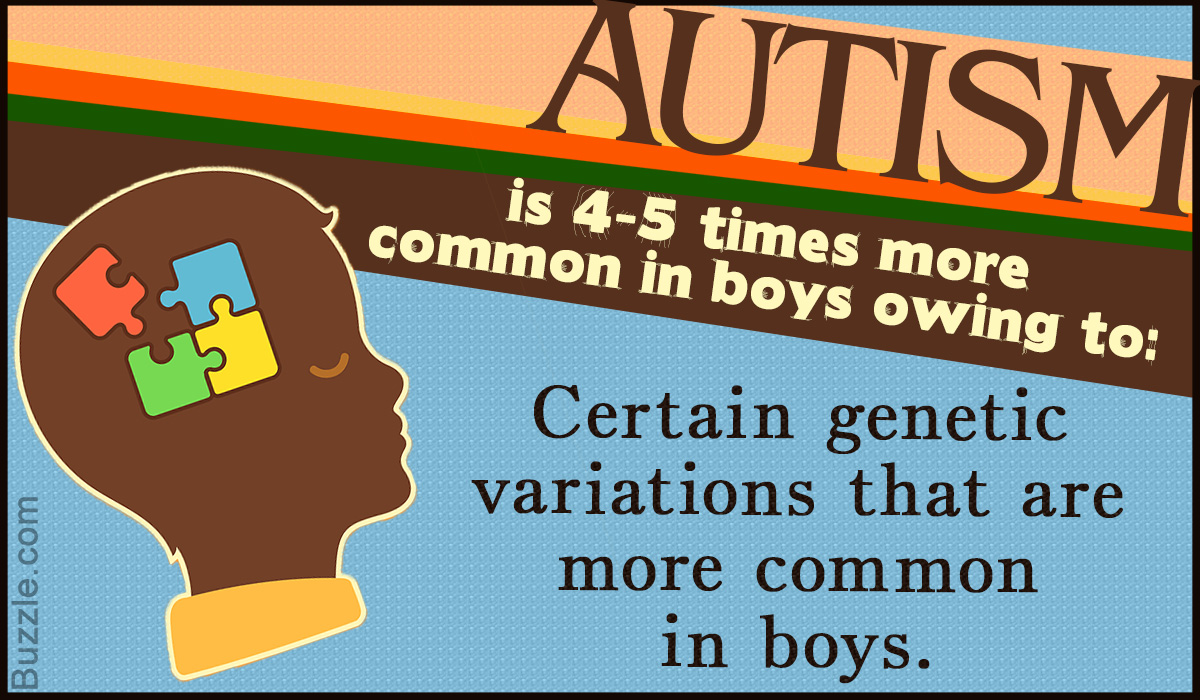 Autism is a complex multifactorial disorder characterized by altered neural development, and is more frequently observed in males. There is no single reason that can explain such a bias clearly, but several hypotheses and explanations have been put forth.

Each autistic child is

Autistic spectrum disorders (ASD) refer to a set of disorders characterized by neurodevelopmental anomalies leading to altered social interactions and repetitive behavior. Autism is one such disorder and is the result of several genetic and environmental factors.

The symptoms are often apparent during infancy or before the age of 30 months. These include language delay, less attention to social stimuli, repetitive movements, etc.

Although the precise etiology remains unclear, several factors have been associated with the risk for developing autism. One of the mysteries underlying autism is the strong gender bias and the fact that males are four times more likely to be affected.

There is no clear understanding for such a bias, but it is well implicated that there are surely certain molecular mechanisms or factors that increase the risk for boys and/or protect girls from developing autism. The theories and explanations for the same have been provided below.

The Diagnostic and Statistical Manual of Mental Disorders (Fourth Edition) currently includes the following five disorders under the umbrella term of ASD:

However, the first three are more commonly referred to as ASD, and the last two on the list are genetic conditions under which autism-like symptoms may be present. Nevertheless, each disorder is a complex one and arises due to a combination of several factors including age of the parents during conception, genetic alterations as well as environmental factors.

Why is Autism More Common in Boys?

Several approaches have been taken by scientists and researchers in the medical community to understand this complex disorder, as well as the intriguing gender bias observed. Some of these approaches have revealed statistically significant data, whereas some are speculations that are being studied and verified. These include certain genes and genetic mechanisms, hormonal variations, as well as the fundamental differences in the male and female minds.

In order to study the genetic factors that pose a risk for autism, scientists studied and analyzed genetic samples from several families with autistic children. This led to the identification of a specific region on chromosome 17 to be associated with an increased risk for autism. More interesting observation was that this region contains genetic variants that are more commonly found in boys.

A study at UCLA resulted in the identification of a specific gene called CACNA1G present in this region of chromosome 17. Variations in this gene alters the flow of calcium in and out of the nerve cells, which ultimately hampers normal brain development. Autistic individuals show a specific variant of this gene, which is more common in boys.

The Role of Hormones

Hormones play a major role in a variety of metabolic and developmental processes of the body, including neural development. A study at the George Washington University Medical Center has demonstrated that estrogen, a type of female sex hormone, protects females from developing autism.

Another pair of hormones that influence social behavior and are associated with autism is oxytocin and vasopressin. In the regions of the brain that are affected during autism, vasopressin is present in higher amount in boys. In addition, during brain development, boys are more sensitive to the hormone vasopressin. On the contrary, brain development in girls is insensitive to the levels of vasopressin. This has been suggested to provide protection from autism. In addition, the protective role of oxytocin in females is also being studied.

The ‘Extreme Male Brain’ theory is based on the above mentioned premise, and is an extension of the empathizing-systemizing (ES) theory, which takes into consideration two important parameters:

It is a known fact that females are better empathizers and males are better systemizers. Depending on the levels of empathy and systemization the brain has been classified into the following types:

Testosterone produced in the fetus is responsible for the differences in the neural structure of males and females. High levels of such fetal testosterone may lead to the development of an extreme male brain. This event is more likely to occur in boys as compared to girls.In the words of Simon Baron-Cohen,

“If a male brain is a risk factor for autism, this may explain the lower prevalence in females.”

Although several studies indicate a higher risk of autism for boys, these theories and speculations require further research to identify the precise reason for such a gender bias. This poses a challenge to the medical community, since autism involves multiple genetic elements, as well as an influence of environmental factors on these genetic elements. In addition, each autistic child is unique, and exhibits different behavioral traits.