Mosaic Down syndrome is a genetic disorder, wherein an affected individual possesses two types of cell, some with 46 chromosomes, and others that contain an extra copy of the chromosome 21. The presence of an extra chromosome in some cells can manifest in several different ways, and produce a number of physical and cognitive symptoms, which are discussed in this article.

You are here: Home / General Health / Mosaic Down Syndrome Symptoms

Mosaic Down syndrome is a genetic disorder, wherein an affected individual possesses two types of cell, some with 46 chromosomes, and others that contain an extra copy of the chromosome 21. The presence of an extra chromosome in some cells can manifest in several different ways, and produce a number of physical and cognitive symptoms, which are discussed in this article. 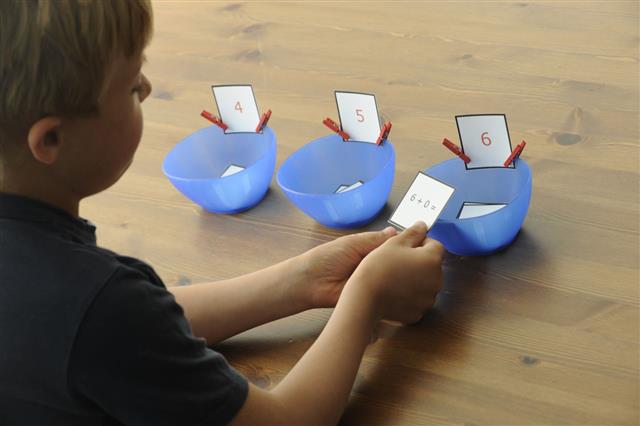 Mosaic Down syndrome is a rare condition that accounts for only 2 to 4% of the total cases of Down Syndrome.

But individuals born with mosaic down syndrome contain two types of cell. One type of cells are normal with 46 chromosomes, while the other type of cells contain an extra copy of the chromosome 21, i.e., 47 chromosomes in total. Mosaic Down syndrome is a rare form of Down syndrome, and it usually stems from the early developmental stage, due to an abnormality in cell division after fertilization.

More about Mosaic Down Syndrome?

» But, if an error takes place in the process of chromosomal replication and separation, it can result in the generation of an extra copy of chromosome 21 in one cell. From here on, all the cells that develop from this particular cell contain three copies of chromosome 21.

» There is another possibility that the sperm or the egg cell could have contained an extra copy of the chromosome 21. But, at the time of cell division, this extra chromosome is lost from one of the cells that develops from the embryo. So, all the cells that originate from that particular cell contain 46 chromosomes, and as a result, the baby is born with two different types of cells.

» In the case of Down syndrome, the extra copy of chromosome 21 is passed on to all the cells developed from the fertilized egg. As a result, all cells contain 47 chromosomes. The risk of conceiving a baby with Down syndrome can increase with advancing maternal age, and having a child with Down syndrome.

» The symptoms of Mosaic Down syndrome can vary significantly from one person to another. Some people can have all the aforementioned characteristics, while others can have only a few of them. Sometimes, the presence of an extra chromosome can manifest itself in several different ways and affect any organ of the body.

Previously, a decision to screen for Down syndrome was governed by the age of the pregnant woman. But now, American Congress of Obstetricians and Gynecologists has recommended that screening tests for Down syndrome should be offered to all pregnant women, irrespective of their age. The tests that are usually performed in the first trimester for this purpose are:

Ultrasound is mainly performed to measure nuchal translucency. In other words, this test measures the clear or translucent space in the tissues located at the back of the neck. When an abnormality is present, more fluid tends to accumulate in these tissues, and causes that space to become larger than average. An increased nuchal translucency can, therefore, indicate a higher risk of Down syndrome.

Blood tests are conducted to measure the levels of pregnancy-associated plasma protein-A (PAPP-A), alpha-fetoprotein, and a hormone, known as chorionic gonadotropin (HCG). Abnormal levels of these substances can indicate the presence of an abnormality.

» The two tests mentioned above are together called ‘first trimester combined test’. However, many women prefer a full integrated testing over an early assessment. A full integrated test is done in two parts during the first and second trimesters, and the results are then combined to estimate the risk of Down syndrome. This test has a lower false-positive rate than the ‘first trimester combined test’.

» Part one of this test is done in the first trimester, and it involves both ultrasound and a blood test. Ultrasound is done to measure nuchal translucency, while the blood test is carried out to measure the level of PAPP-A.

» Part two of the test is conducted in the second trimester, usually at 15 to 20 weeks of pregnancy. This test is known as quad screen test or quadruple screen test, and it measures the levels of four pregnancy-associated substances in the blood. These substances are known as alpha-fetoprotein, estriol, HCG, and inhibin A.

If the results of the screening tests are positive, then a more invasive test may be carried out to confirm the diagnosis of Down syndrome. Diagnostic tests employed for this purpose include:

Amniocentesis: In this test, a needle is inserted into the uterus, in order to draw a sample of amniotic fluid that surrounds the fetus. The sample is then examined to analyze the chromosomes of the fetus. It is usually performed after 15 weeks of gestation.

Chorionic Villus Sampling (CVS): This test is generally conducted between 9 to 14 weeks of pregnancy. In this test, a sample of the cells taken from the mother’s placenta is investigated to find out if an abnormality exists in the fetal chromosomes.

Percutaneous Umbilical Blood Sampling (PUBS): Here, blood is drawn from a vein in the umbilical cord, and then investigated to detect the presence of chromosomal abnormalities. This test is usually done when the results of other tests are not adequate to make a definitive diagnosis. However, this test carries an increased risk of miscarriage.

» Treatment for mosaic Down syndrome is similar to that of Down syndrome. Though there is no cure for this syndrome, it is possible to improve mental or cognitive abilities, as well as the motor skills of the affected children with appropriate treatment.

» Early intervention programs are quite effective in this regard. These specialized programs can include physiotherapy, language therapy, and special educational programs, that can help improve the motor, language, social, and self-help skills of the affected children as fully as possible.

» A number of different healthcare practitioners can be required to care for a child with Down syndrome, depending on his particular needs, and the kind of health problems experienced by him. So, along with your pediatrician, you may need the help of a cardiologist, an ophthalmologist, an endocrinologist, a gastroenterologist, a physical therapist, an occupational therapist, a speech or language specialist, and a developmental pediatrician.

» Along with medical treatment, it is equally important for people with Down syndrome to follow a balanced diet and exercise regularly, as they have a high risk for weight gain and obesity.

» Due to the advancement in the medical field, the life expectancy of people with Down syndrome has increased considerably in the recent times. In 1929, a baby born with this syndrome rarely lived till the age of 10 years. But today, at least half of the people with Down syndrome can expect to live for about 50 to 60 years, depending on the severity of the health problems experienced by them.

» The babies born with this syndrome usually achieve the developmental milestones, like crawling, walking, or talking. But, it often takes them longer to meet these milestones, as compared to the children without Down syndrome. However, early intervention programs can make a huge difference not only in achieving the developmental milestones, but also in improving their quality of life. Contrary to popular belief, many people with Down syndrome can lead a normal life with their families, or live independently, attend mainstream schools, and also have jobs.

Having a child with Down syndrome can be a difficult situation for parents in the beginning, as such a child needs special care and attention. But you can consider to get support and advice from other parents who have children with Down syndrome, and also from a support group, like the National Down Syndrome Society and the National Association for Down Syndrome. This will help you know more about Down syndrome, as well as the special needs of the children born with this genetic disorder.