An overactive immune system is a condition in which the immune system of the body goes awry and begins to attack the body's own cells and tissues. This results in pain and inflammation in the attacked region and chronic attack of the body parts conduce to autoimmune diseases and allergies... 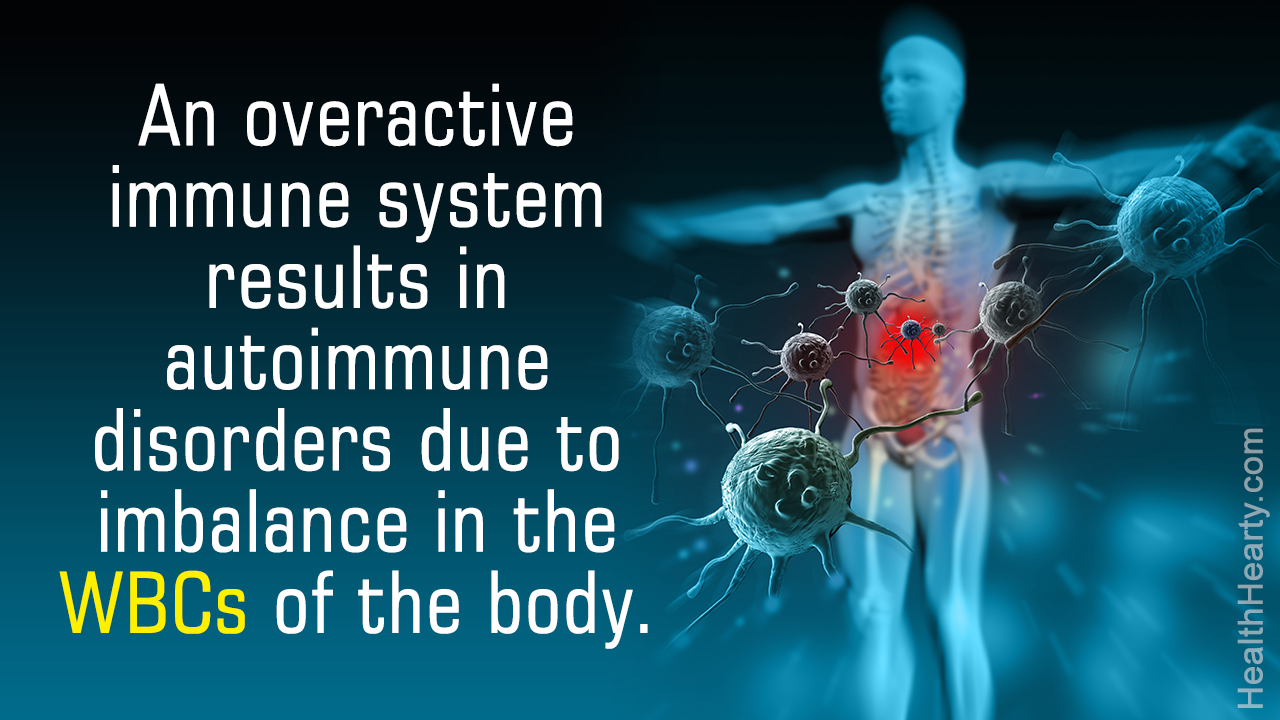 An overactive immune system is a condition in which the immune system of the body goes awry and begins to attack the body’s own cells and tissues. This results in pain and inflammation in the attacked region and chronic attack of the body parts conduce to autoimmune diseases and allergies…

Our immune system is a crucial part of the body as it is responsible for defending our bodies from attacks of various deleterious viruses, bacteria, and other microorganisms. The immune system comprises a complex network of white blood cells, antibodies, and immune factors that heal the body when we’re hurt and protects the body from cancer and infections. It acts like the fence of a house and keeps unwanted guests like microbes and pollutants away. However, there are times when this line of defense goes awry and begins to attack the body itself. It’s like you have soldiers fighting for your country and for some odd reason they go wonky and begin to fire on their own country folks. This condition where the immune system misunderstands the body to be its enemy and begins to attack is called overactive immune system. It is one of the most disconcerting health issues in countries like New Zealand and Australia.

Overactive immune system is nothing but an immune system dysfunction and is also called autoimmunity or autoimmune disease. An overactive immune system results in autoimmune disorders and allergies due to imbalance in white blood cells of the body and other immune factors. This imbalance is caused by the overactivity of the immune components and when these components fail to differentiate between enemy and their own body cells. This hyperactivity results in destruction of various body tissues, changes in the functioning of organs and even abnormal growth of these organs is seen.

An overactive immune system, after some time, results in a variety of autoimmune conditions like multiple sclerosis, where the immune system is attacking the myelin sheath, and arthritis, where the immune system attacks the synovial membrane located between the joints. The other autoimmune diseases are lupus, psoriasis fibromyalgia, inflammatory bowel diseases, etc. However, why exactly the immune system goes awry is still unknown. Though genetics is one reason, not everybody inflicted with this disease has had an earlier cause of overactive immune system in the family. Stress, chemical toxicity, hormones, and infections are some other factors assumed to be factors leading to this problem. However, no definitive research results are available thus far.

This disease involves damage to various parts of the body, especially the joints. It causes chronic inflammation of the joints and results in their permanent destruction, thereby rendering the person immobile in the long run. However, rheumatoid arthritis is not just limited to joint damage. It also affects skin, blood, lungs, kidneys, etc. Commonly observed symptoms are fatigue, joint pain and stiffness, loss of appetite, etc. The symptoms of this disease may keep appearing and disappearing with time. When the symptoms disappear, the disease is said to be in remission. However, remissions are seen to be followed by relapse phases, where the disease becomes active again.

This autoimmune disease is seen to affect different tissues and internal organs such as kidneys, heart, lungs, joints, etc. It is seen to occur more commonly in women, than men and cause inflammation of joints, skin, blood cells, and other parts of the body. Diagnosing this disease is a herculean task, simply because it mimics scores of other illnesses. The symptoms are so generic that it takes the specialist longer to identify the disease. There have been speculations that systemic lupus erythematosus and rheumatoid arthritis are also linked. Corticosteroids and antimalarial drugs are given to control the symptoms.

This disease is characterized by damage to moisture-producing glands such as salivary, tear glands, etc. Certain type of white blood cells (lymphocytes) get unusually accumulated in the glands and prevent them from performing their function of producing tears, saliva, etc. This is why people with this syndrome are seen to suffer from dry mouth and dry eyes. The vagina, skin, and nose are also seen to get dried. Again this condition is seen to affect women more than men. In the diagnostic tests, the amount of tear production is checked, however, diagnosing this disease is extremely difficult.

In this disease, the skin and connective tissues are seen to get hardened. Dry patches are seen to occur on the skin, which get thicker and harder with time. This connective tissue disorder involves excess production of collagen fibers, thereby resulting in skin scarring and skin thickening. When skin patches are formed by this disease it is known to be localized, however, when organs like the heart, kidneys, lungs, etc. get affected it is called systemic scleroderma. Women belonging to the child-bearing age are seen to be more commonly affected than men.

This is a syndrome affecting the peripheral nervous system. Because the peripheral nervous system (PNS) connects one’s brain and spinal cord to the rest of the body, damage to the PNS prevents nerve signal transmission. Thus, messages from the brain fail to reach the muscles and the person is unable to perform motor functions. Thus, people experience tingling sensation and numbness in their arms, legs, etc. This syndrome is a rare autoimmune disease and is seen to result in body paralysis.

Besides the above mentioned diseases, the other systemic autoimmune diseases are systemic vasculitis, Wegener’s granulomatosis, and rheumatic fever.

These are those autoimmune diseases which are seen to specifically affect one organ or a localized site in the human body.

Sometimes it so happens that the adrenal glands situated on top of the kidneys, do not produce adequate amounts of adrenal hormones (cortisol and aldosterone) due to some damage in their structure (adrenal cortex). This adrenal cortex damage can be caused by autoantibodies or by infections, hemorrhage, cancer, etc. This disease is seen to affect both men and women equally. The main problem with this disease is that it is often diagnosed once 70% to 80% of the cortex is destroyed, because this is when it becomes symptomatic. Replacement corticosteroids are given to the patient to control the symptoms of this disease.

In this disease, the myelin sheath surrounding the nerve cells get damaged, thereby affecting the conduction of nerve impulses in the brain, spinal cord, and the rest of the central nervous system. Since nerve conduction slows down, the person faces mobility issues, vision loss, numbness, giddiness, etc. In order to diagnose this disease, the doctor may carry out a lumbar puncture and MRI scan. While there is no cure for this disease, medicines are given to control the symptoms. This disease is seen to mainly affect women, rather than men.

For motor movements to take place, the nerve cells need to take impulses from the brain to the muscle cells and bring about the action. In this neuromuscular disorder, the muscle cells are unable to receive impulses and signals from the nerve cells, thereby causing muscle weakness, which increases on activity and reduces after periods of rest. There is some connection between the thymus gland and this disease, however, what exactly it is, has not yet been determined. Although this disorder mainly affects striated or voluntary muscles, certain involuntary muscles of the eyes, mouth, etc. are also seen to be affected.

People whose bodies do not produce adequate amounts of insulin are said to suffer from type 1 diabetes mellitus. The autoimmune disease destroys the insulin-producing beta cells of the pancreas and within a decade or so, all the beta cells are destroyed by the autoantibodies. Thus, people with this form of diabetes have to take insulin all their lives. Usually, type 1 diabetes is seen to occur in childhood and the treatment goes on for life.

In this autoimmune disease, the autoantibodies destroy the collagen present in alveoli of the lungs and glomeruli of the kidneys. This results in lung and kidney damage. Most of the cases, both organs get affected, however, in some people one either one organ gets affected and damaged. Goodpasture’s disease is seen to affect men more than women. Diagnosis of this disease involves checking for abnormal lung sounds which indicate lung damage or fluid retention, presence of blood or protein in the urine, etc. which indicate kidney damage. Treatment measures in the form of plasmapheresis and corticosteroid medication administration is carried out.

When organs of the immune system attack the body’s own cells and tissues, they conduce to localized inflammation in the area where the attack occurs and may give rise to various related symptoms. For example, if the immune system in its dysfunctional state attacks the synovial membrane present in the joints, then inflammation will occur at these joints along with pain. As the attack continues it will result in arthritis and one will experience early arthritis symptoms. So basically, the symptoms comprises pain and inflammation in the attacked region. Fever, muscle aches, dizziness, and fatigue are also commonly observed autoimmune disease symptoms.

Autoimmune system diseases are diagnosed by a combination of blood tests, findings from physical examination, history of the patient, and investigative procedures like X-rays, etc. However, these diseases are quite difficult to diagnose, especially in the initial stages of the disease, because the symptoms and test data may not be specific enough to come to any conclusions.

Until recently, the most common overactive immune system treatments administered were steroids, chemotherapy, and important immunosuppressants. However, these medicines conduced to various side effects and proved detrimental to the body. The latest, effective treatments target only those parts of the immune system that are dysfunctional. They do this by blocking specific molecules in the inflammatory pathway. Autologous haematopoietic stem cell transplants (HSCTs) are known to be the most promising measure to achieve long term remission from these autoimmune diseases. These transplants involve removing dysfunctional cells of the immune system and replacing them by fresh cells.

Autoimmune diseases affect approximately 5% to 8% of the population, of which about 75% of autoimmune diseases occur in women and are the fourth leading cause for disability in women. Moreover, researchers at the University of Leicester state that an overactive immune system can trigger cancer. Since, autoimmune diseases do not have any cure as of now, all these women end up carrying the burden of this painful disease all their lives. The only thing they can do is consume an overactive immune system diet and take medication such as anti-inflammatory drugs and steroids to alleviate the pain.

Sugar and Carbohydrates Linked to Obesity