The swelling of Supraclavicular lymph node implies the presence of pathogens in the body. Read on to know more about the factors that can cause swelling in it.

The swelling of Supraclavicular lymph node implies the presence of pathogens in the body. Read on to know more about the factors that can cause swelling in it. 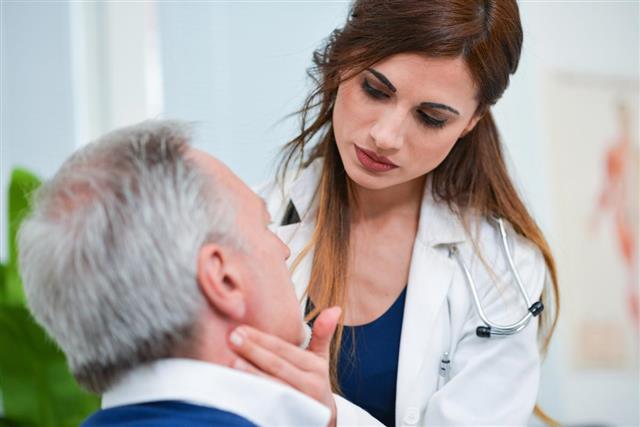 Before we learn about this condition, it is necessary to know about the role of supraclavicular gland and body system they are part of. These nodes are a part of the body’s defensive mechanism against the microorganisms that keeps on attacking. To be precise, these nodes are part of the lymphatic system. This is a vast network of lymph ducts, 500 – 600 lymph nodes, afferent and efferent lymph vessels. In addition to these, some organs such as spleen, tonsils, thymus glands, etc., are also part of this system.

During the transportation of blood through the arteries and veins, blood plasma passes through the walls of the blood vessels and gets collected in the spaces between body tissues. Along with it comes the infectious disease causing bacteria, virus and yeast. Out here, they are safe from the white blood cells in the blood and can cause the body a great harm. The lymphatic system, thorough its lymph capillaries and ducts collects blood plasma (which is now referred to as lymph) and microorganisms and transports it to the lymph nodes which finally drain it into the blood circulatory system. The other function is to protect the body against infections. These nodes along with the rest of lymph nodes, employs lymphocytes (white blood cells) to kill microorganisms in the lymph and sanitize it before its onward passage through the system.

These nodes which lies in the hallow above the right and left clavicle (collarbone) is one such group of 2 lymph nodes. One of the diseases that can cause these nodes to swell is lymphedema i.e. collection of fluid in the lymph nodes. In most of the cases, it is due to the lymphocyte activity against the pathogens. Let us see how this happens. The node on the right side takes the lymph from the mediastinum, lungs, esophagus, etc., cures it of the pathogens and sends it on its onward journey. On the other hand, left node which is also known as Virchow’s node receives lymph through thoracic duct and from most of the body (mainly abdomen). In short, these nodes collect, cure and forward the lymph from the thoracic cavity and abdomen.

Detection of pathogens or the abnormal cells in the lymph activates lymphocytes. B cells, a type of lymphocytes, mark these pathogens and abnormal cells for destruction using a marker protein. T cells, a type of lymphocytes, looks for these proteins marked cells and tries to eliminate them. The actual work is performed by the natural killer cells and helper cells, both of which are types of T cells. The immune system, on detecting these proteins sends more lymphocytes to these nodes which causes swelling of this lymph node.

Children depends more, for immunity, on the lymphocytes than on the white blood cells that are present in the blood. For this reason a child with low lymphocyte level is prone to infections of all sorts. As has been mentioned above, lymphocyte activity against the microorganisms may cause swelling of the lymph nodes. That is why swelling of the lymph nodes in children is a common occurrence. However, it must be noted that there is a remote chance of enlargement observed in children is due to lymphoma. A child that has fallen victim to these condition exhibits symptoms such as constant weight loss, infections, etc. which should prompt alert parents to take necessary action.

Lymphoma is one of the 4 type of cancers which is caused by the malignant neoplasm of the lymph cells. Lymphoma can also be the cause of swelling of this lymph node. In this condition, usually, T cells and B cells starts multiplying uncontrollably. With the lymph, these cells travels to the distant parts of the lymphatic system. The swelling can be due to these malignant cells getting stuck in it. Multiplication of these abnormal cell at this site may cause the tumor in the lymph nodes, their enlargement and symptoms to appear in the victim. Lymphoma is further classified into Hodgkin’s disease and non-Hodgkin’s lymphoma.

Cancers of different organs located in the chest area such as mediastinal, tracheal, esophageal, lung as well as of chest wall can cause enlargement of lymph nodes. Peritoneum is a membrane that covers or engulf abdominal organs and helps them in maintaining their place. A cancer that lies behind or on the other side of peritoneum is termed as retroperitoneal cancer. It can along with thymomas, mesothelioma, cause the enlargement of this node.

In patients suffering from supraclavicular lymphadenopathy, the chances of this condition turning to malignancy are very high. 90% of these patients above the age of 40, and 25% below it may have to face this problem.

Whatever the cause of swelling, it is a clear indication of that pathogens are very active against the body. In case of adults, the same condition may signify much more than just an infection and it must be looked into.