Skin cancer is characterized by an uncontrolled proliferation of abnormal skin cells. Awareness about the warning signs of skin cancer can increase the chances of early detection and treatment of this disease. The following article provides information about the signs indicative of skin cancers.

Any pimple, spot, pigmentation, rash, sore, scab, ulcer, or bump that does not heal within four weeks may indicate the presence of precancerous or cancerous growth. Professional consultation must be sought to understand the precise etiology.

Skin cancer, also called skin neoplasms, is a set of diseases that involve abnormal and unregulated growth of skin cells. According to the National Cancer Institute (NCI), it is the most common type of cancer, and over one million new cases are diagnosed every year in America.

The prime etiological factor for skin cancer is the ultraviolet (UV) radiation present in sunlight, and emitted by tanning lamps used for artificial tanning. UV radiation causes DNA damage and mutations leading to malfunction of the cellular machinery that regulates cell growth. As a result, the cells multiply uncontrollably leading to the formation of tumors. Other factors include excessive exposure to X-rays, coal and arsenic compounds, frequent radiotherapy, as well as genetic predisposition.

An early diagnosis is the most important factor in treatment and control of cancers. There are no clearcut warning signs for skin cancer since the signs and symptoms vary with each individual case. Moreover, appearance of the tumors varies with stage, seriousness, body type, cancer type, and anatomical location. However, certain guidelines and warning signs have been suggested by experts.

Skin cancers primarily occur on parts of the skin that are exposed to the sun, namely scalp, face, lips, ears, neck, arms and limbs. They often originate from benign (non-cancerous) growths on the skin. Hence, a regular self-examination of the moles, rashes, abnormal patches present on the body parts is essential for early identification. Any atypical growth that does not reduce or heal is the first warning signal for skin cancer. Given below are the warning signs for different types of skin cancers.

This form of skin cancer arises from the basal cells that form the lowermost layer of the epidermis. About 90% of all skin cancers are basal cell carcinomas, and is considered to be the most common amongst all types of cancers. It was considered as a geriatric cancer but the incidence of BCC in the younger population is on the rise.

BCC occurs on the skin parts that are exposed to the sun, especially scalp, face, neck and hands. It is a slow growing cancer, and the tumor may take several months or even years to grow sizeably. It rarely evades vital organs and tissues other than the surrounding ones. However, if untreated BCC leads to extreme tissue damage and disfiguration.

» It may start as a reddish/pink patch or as a scar-like growth on the face, chest, shoulders, back or limbs. These patches or scars may itch and crust.

» It can also form a pearly, translucent, shiny or waxy bump which is most often pink in color. It may also be tan, black or brown in color in some individuals.

» Sometimes, it may start as a flesh-colored or pink growth with rolled borders or as a sore that bleeds often. At times one can observe blood vessels at the center of such growth.

It originates from the squamous epithelium present above the layer of basal cells. It is the second most common type of skin cancer, and often starts from injured skin. Individuals with chronic sunburns and cutaneous inflammation have a high risk of SCC.

It usually occurs on skin surfaces exposed to the sun, but may also develop from mucous membranes and genital parts. SCC is more aggressive as compared to BCC and may spread to the underlying tissues. The SCCs that develop from the non-exposed or inner squamous epithelium show higher tendency to evade other tissues or organs.

» SCC may begin as a persistent scaly patch or wart-like growth that gradually increases in size.

» Bowen’s disease or squamous cell carcinoma in situ is an early stage of SCC, and is characterized by the development of a red scaly patch due to excessive sun damage, viral infection, compromised immunity or arsenic exposure.

» Actinic keratosis or solar keratosis is a precancerous condition that develops into SCC. It is characterized by dry, rough, scaly patch that arises due to persistent exposure to sun. The growth may be pink in color with pink, yellow or white crusty tissue on the sides.

» Persistent, red, firm, dome-shaped nodules may also be an indication of underlying SCC. They generally have crusty appearance on the top, and may bleed frequently. These nodules gradually grow to form a large mass of cells and blood vessels.

» A non-healing ulcer or sore that persistently crusts and bleeds, is a common indication of SCC.

This rare type of skin cancer originates from melanocytes present in the lowermost layer of the skin epidermis as well as in the middle layer of the eye and the inner ear. It is considered to be the most deadly form of skin cancer as it may even lead to death.

Malignant tumors usually begin from the skin surfaces, and rarely develop from the eyes, ears, mouth, colon and small intestines. It may also originate from tissues below the fingernails and toenails as well as soles of the feet. The cancer cells may spread to other vital organs like lungs, gastrointestinal tract, brain, liver, etc. Melanomas generally resemble moles and/or develop form existing moles. The following methods are useful to identify a melanocytic lesions:

This method provides a set of physical characteristics useful for identification of melanomas. These are:

Border: The borders of atypical growths or lesions are irregular, uneven or notched.

Color: The lesions are not uniformly colored and show a mottled appearance with shades of red, tan, brown, black or even blue.

Diameter: Lesions with a diameter or width larger than 6mm are indicators of melanoma. However, smaller lesions showing the above characteristics are also indicative of melanoma.

Evolving: Abnormal melanocytic lesions are dynamic with respect to the above characteristics. They constantly enlarge, undergo changes in color, shape, etc. as well as begin to itch and bleed.

The ‘Ugly Duckling’ Sign:
Generally all the normal moles show a similar morphology. Any mole that is significantly different from the other moles (siblings) is considered to be the ‘ugly duckling’. It may be the early stage of a malignant tumor, and demands a professional consultation.

Also known as neuroendocrine carcinoma of the skin, this extremely rare form of cancer arises from Merkel cells, present in the lowermost layer of the epidermis. These cells are associated with the nerve endings, and function as touch receptors. This form is extremely aggressive, and grows faster than any other type of skin cancer. It may begin as shiny, red, firm and fast-growing nodules on the head, neck, arms or lips.

It is caused by human herpes virus-8 (HHV8), and often occurs in association with AIDS (Acquired Immunodeficiency Syndrome). It affects the internal organs (especially gastrointestinal tract) as well as the skin. Red, blue or purple papules may be observed on the face, back, feet or genitalia as well as in the mouth, nose, throat or lungs. Symptoms include nausea, vomiting, shortness of breath, leg swelling and abdominal pain. Additional symptoms may be experienced depending on the location of the tumor.

Skin cancers can be diagnosed through skin examination and biopsy. Treatment options include the surgical removal of tumors (example Mohs micrographic surgery), cryosurgery, radiotherapy, chemotherapy and laser therapy. Following excision, remaining cancer cells are scraped out using a curet (curettage) or are destroyed using electric needles (electrodessication). Biological therapies that activate an immune response against the tumor may also be prescribed in certain cases.

As per the National Cancer Institute (NCI), skin cancer is now almost 100% curable if caught early, and treated promptly. Regular skin examination and professional advice in case of any suspicious spots or lesions is essential for the early identification and treatment of skin cancers. 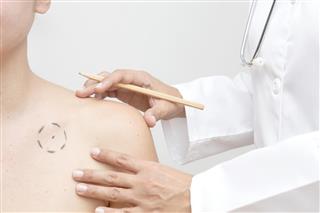 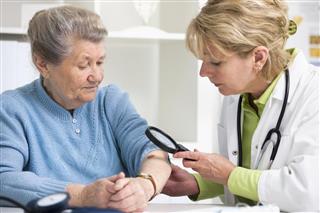 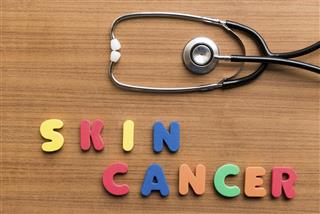