You are here: Home / General Health / What Causes Different Colored Eyes in Humans?

In the United States, though not something common, different colored eyes is diagnosed in around 1% of the total population.

Normally, the color of both the eyes in any individual is the same. However, this is not the case in people who have heterochromia, a condition in which the eye color of an individual is not same. Commonly known as different colored eyes or mismatched eyes, here, each iris (thin disc surrounding the pupil of the eye) has a different color. So, a person with heterochromia may have one brown eye, while the other eye appears to be green. In general, one eye has a darker or lighter iris as compared to the other eye. Although heterochromia is considered a rarity in humans, it is more prevalent in cats, dogs, and horses. Jane Seymour, Kate Bosworth, Henry Cavill, and David Bowie are some of the celebrities that have this condition.

As we all know, melanin, the pigment secreted by the iris cells, determines the color of the eye. The eye color appears darker when a higher amount of melanin is in the iris. Lack of melanin has often been associated with blue eyes. However, with heterochromia, the melanin is not deposited consistently in both the eyes. This difference in concentration of melanin often leads to different colored eyes. Depending upon how the melanin is distributed, one eye color may be completely different from the other, or the eyes may exhibit a hue of colors, such as a green iris with a brown ring surrounding the pupil. 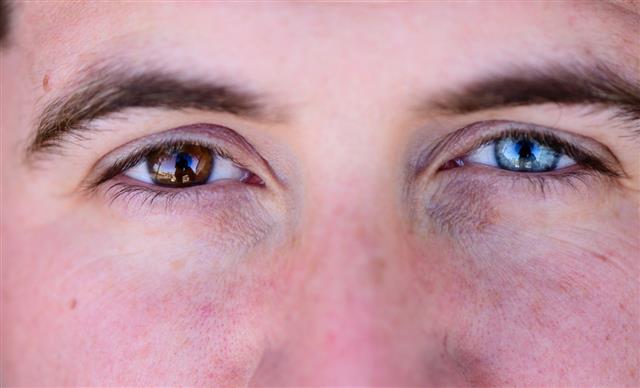 In most cases, this difference in coloration in both the eyes is present at birth. In other words, heterochromia often occurs due to genetic factors. Usually, the condition has a strong hereditary component, but in some cases, the child may show heterochromia, despite the parents not having it.

Waardenburg Syndrome: This is a rare genetic condition, typically marked by inborn deafness and an abnormal change in color of the skin and eyes. Apart from having congenital deafness, people with this syndrome have distinctive physical characteristics, such as a cleft lip and palate. This is generally an inherited condition, in which the abnormal gene is received by the child from the parent.

Neurofibromatosis: Neurofibromatosis, resulting from faulty gene mutation, causes unnatural growth of cells in the nerve tissues. This leads to the formation of tumors along the nerves in the skin. When these tumors affect the eyes, it can lead to heterochromia. Flat, light-brown spots, and soft bumps on or below the skin are some of the common symptoms of neurofibromatosis.

Heterochromia is a genetic problem, but sometimes, it can affect an individual later in life too. Following are the reasons.

Eye Injury: Trauma, such as a punch to the eye can cause heterochromia. This is because, such kind of ocular trauma that causes internal bleeding leads to accumulation or substantial loss of melanin from/in the affected eye. As such, the damaged eye may appear darker or lighter than the other one. This change in color of the eye may be temporary, or even last permanently, depending upon the severity of the injury.

Glaucoma: Glaucoma refers to a set of eye conditions that causes excessive build-up of pressure inside the eye, eventually leading to progressive, irreversible damage to the optic nerve. The elevated intraocular pressure (IOP) associated with glaucoma can also disturb the uniform distribution of melanin on the iris, which may eventually lead to heterochromia.

Chronic Iris Inflammation: Famous American actress Mila Kunis suffered from iris inflammation for years, which led to one eye becoming green, while the other was brown. Chronic iris inflammation can be due to eye infections or autoimmune disorders, in which the immune system invades its own body tissues.

Foreign Object in the Eye: A foreign object trapped in the eye may damage the iris, the place where melanin is produced. Usually, small dust particles that get stuck in the eyes cause reddening of the white part of the eye, but do not harm or change the iris color. However, an object that has penetrated the iris can damage the melanin-producing cells, which may change the color of the affected eye.

On the whole, people who are born with this eye pigmentation abnormality may have to contact a doctor to check whether it is a symptom of some rare medical condition mentioned above. Usually, congenital heterochromia is mild, and one can hardly notice the difference in eye color. Moreover, it is unlikely to be connected with any rare medical condition. In case ‘different colored eyes’ is not congenital and occurs suddenly, consultation with an ophthalmologist is necessary to find out the underlying cause.

Disclaimer:The information provided in this article is solely for educating the reader. It is not intended to be a substitute for the advice of a medical expert.