What You Need to Know About the Ebola Virus

The Ebola virus has been in the news due to the recent outbreak in certain regions of Western Africa. The Ebola virus disease, which was formerly referred to as hemorrhagic fever due to internal and external bleeding, has a high fatality rate that ranges between 60 - 90%. This HealthHearty write-up provides information on the causes, symptoms, transmission, and preventive measures for this viral disease.

You are here: Home / General Health / What You Need to Know About the Ebola Virus

The Ebola virus has been in the news due to the recent outbreak in certain regions of Western Africa. The Ebola virus disease, which was formerly referred to as hemorrhagic fever due to internal and external bleeding, has a high fatality rate that ranges between 60 – 90%. This HealthHearty write-up provides information on the causes, symptoms, transmission, and preventive measures for this viral disease.

The Ebola virus is named after the Ebola River near Yambuku in the Democratic Republic of the Congo (formerly called Zaire), where one of first outbreaks occurred in 1976. According to the Centers for Disease Control and Prevention (CDC), there have been more than 3,000 cases of Ebola, and more than 2,000 deaths since 1976.

Ebola viruses belong to the Filoviridae  family. These viruses have a long filamentous structure. Out of the five subtypes that have been identified, only four are known to affect the human population. Each of these subtypes is named after the location in which these were first identified. The five subtypes include Ebola-Zaire virus, Ebola-Sudan virus, Ebola-Bundibugyo virus, Ebola-Ivory Coast virus (now called Ebola-Tai Forest virus), and Ebola-Reston virus (found in the Philippines and the People’s Republic of China).

The Ebola-Bundibugyo, Ebola-Zaire, and Ebola-Sudan viruses have been linked with large outbreaks in certain parts of Africa. Most of the outbreaks have occurred in Central and West Africa, in regions that lie close to the tropical rainforests. According to the World Health Organization, Ebola is one of the most virulent viral diseases known to mankind. In the wake of the recent outbreak, the CDC has provided guidelines for healthcare workers who are in close contact with affected patients, as they are at a great risk of getting infected. It must be noted that the Ebola virus disease is not an airborne disease.

Information About the Ebola Virus

Of Ebola’s five subtypes, the Zaire strain, which was the first to be identified, is believed to be the deadliest. The Bundibugyo strain was discovered in 2007, in Uganda. The only case in the Ivory Coast was discovered during the autopsy of a sick wild chimpanzee in 1994. Named after Reston in Virginia, the Reston Ebola strain was discovered in monkeys imported from the Philippines. According to CDC, humans have been infected with the Ebola Reston, but there have not been cases of illness or death due to this strain.

In case of the first outbreak of Ebola in Zaire, 280 deaths were reported out of a total of 318 cases. Around the same time, there was an outbreak in Sudan, wherein, there were 151 fatalities out of a total of 284 cases. Since then, there have been outbreaks in Sudan, Democratic Republic of the Congo, Gabon, Ivory Coast, and Uganda. In 2000, 425 cases were reported in Uganda, out of which, 224 patients died. Though there have been outbreaks earlier, the current outbreak is the deadliest one recorded, as it is the largest in terms of the number of infected individuals. Until this outbreak, around 2,361 people had been infected since the notification of this disease in 1976. More than 1,548 of the infected individuals died. Therefore, taking the high mortality rate of this disease into account, it becomes extremely essential to identify its symptoms and prevent the transmission of the virus to others.

Statistics on the Recent Ebola Outbreak 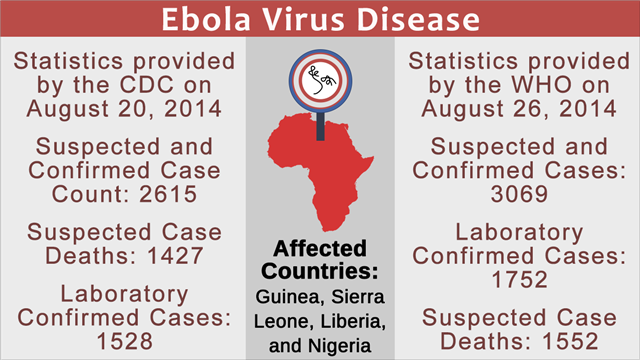 Initially, the consumption of gorilla meat was believed to be the contributing factor for an outbreak, but it was ruled out by scientists, as infected apes were found to be more likely to die than humans. It is now believed that fruit bats in the tropical rainforests in Africa may be the natural host of the Ebola virus. Other animals can contract the virus from the bats, and humans can contract the virus from these animals. The current outbreak seems to have started in a village near Guéckédou, Guinea, where bat hunting is common. It began as a handful of cases in Guinea in March, but quickly spread to neighboring Sierra Leone and Liberia.

The virus spreads when one comes in contact with the bodily fluids of an infected person. It can also be transmitted through contaminated surfaces, needles, or medical equipment. It must be noted that an infected person is not contagious until he or she exhibits the symptoms of the disease. Thus, those in close contact with infected individuals need to take precautionary measures. If precautions are taken, there’s less likelihood of the transmission. Health workers and caregivers are particularly at risk, especially when they care for infected patients during the final stages of the disease, when the patients experience hemorrhagic fever that is characterized by internal and external bleeding. According to statistics given by WHO, more than 100 health workers have been infected, and at least 50 of them have died.

The virus has a long incubation period of about 2 – 21 days. More often than not, the symptoms appear 8 – 10 days after exposure to the virus. The disease is characterized by the following symptoms:

These nonspecific early symptoms can be mistaken for other diseases, such as malaria, typhoid fever, meningitis, etc. It must be noted that 30 – 50% of the infected individuals might experience internal and external bleeding (bleeding from the nose, mouth, rectum, eyes). They may pass blood in the urine too. They could even bleed under the skin. As the blood vessels continue to leak fluid, it causes the blood pressure to nosedive. In severe cases, internal bleeding affects internal organs, thereby causing multi-organ dysfunction (liver or kidney) or failure, which in turn can lead to shock and death.

There is no vaccination against the virus, and there is no specific treatment for Ebola. If this infection is suspected and confirmed, patients are isolated. The treatment consists of hydrating the patients, maintaining their oxygen status and blood pressure.

There have been several cases of healthcare workers contracting the virus from patients, which is why WHO has issued the following guidelines for dealing with confirmed or suspected cases of this viral disease:

The Centers for Disease Prevention and Control has provided guidelines for anyone who is traveling to an area where the Ebola outbreak is occurring. These include:

CDC acknowledges the possibility of the transmission of the virus in the event of infected individuals traveling from West Africa to another country. Therefore, appropriate measures have been taken. Flight crew members are being educated about ways to deal with a suspected case of Ebola, so that there is no contact between the sick individuals and other passengers. Crew members have also been instructed to wear disposable gloves. They have also been asked to provide a surgical mask to the affected individual, so that the virus doesn’t spread through body secretions while talking, sneezing, or coughing.

CDC is also providing assistance with exit screening and communication efforts on the ground in West Africa, so that sick travelers are prevented from getting on planes. Moreover, airports in the affected regions of Guinea, Liberia, and Sierra Leone are screening travelers for the symptoms.

Currently, no licensed vaccine is available for use in humans. There is no definitive cure for Ebola. However, there are some experimental treatments that have shown good results on a few human subjects. There is one vaccine that has shown good results on macaque monkeys, but further research is required to find out if it will be effective in humans. ZMapp is a therapeutic product that is being developed for treating individuals infected with the Ebola virus.

In the absence of a licensed vaccine, following stringent infection control measures becomes the best way to prevent this disease. Healthcare workers are at a great risk due to contact with infected individuals. Thus, they should be equipped with protective gear. They should also be trained to use protective gear properly. They need to be educated about all the precautionary measures, as needles, gloves, objects, or surfaces contaminated with bodily fluids of the infected person can cause the disease to spread. Many of the cases also involve individuals who have been taking care of sick relatives or have prepared an infected body for burial. Thus, educating people about this disease is extremely important.